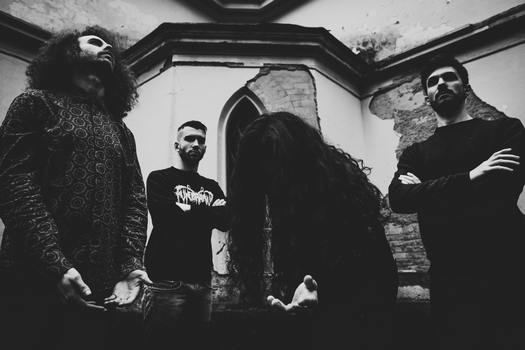 Summer is rapidly coming to an end, as the fall looks to pick up once again – with or without concerts, unfortunately. At least there’s still plenty of new music to be released to satisfy the urge for metallic consumption. This month we look at Aversio Humanitatis, Bedsore (pictured above), Burn the Mankind, Centinex, Dying Oath, Fermentor, Fleshdriver, Mad Max, Messiah, My Silent Wake, Sanity Control, Scars, Selenseas, Tulkas and Winter Deluge… 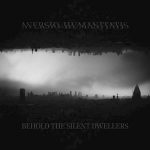 Aversio Humanitatis – Behold the Silent Dwellers (Debemur Morti)
Purveying dissonance and disharmony at every turn, Spain’s Aversio Humanitatis run through the obtuse black metal gamut on their second full-length, Behold the Silent Dwellers. A good chunk of the album operates in the experimental sphere where obtuse riffs take form and long-form blasts go on for miles, it seems. The riffs, as expected, are highly imaginative, pulling from every corner of BM and twisting them along the way. Some additional twists are welcome in the form of the old-school opening of “The Sculptor of Thoughts,” which shows the Spaniards have their hearts in the right place. – David E. Gehlke (Aversio Humanitatis Facebook) 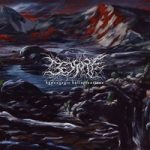 Bedsore – Hypnagogic Hallucinations (20 Buck Spin)
Bands that push the old school death metal boundaries continue to pop out of the woodwork, and Bedsore leaves a pleasantly eerie feeling as you listen to Hypnagogic Hallucinations. Psychedelic and spooky vibes abound, at times making it almost feel like a trippy version of old school Death on an acid trip. The music is twisted and occasionally spiraling, and the otherworldly build-ups, particularly in the album’s second half, show some real promise. Those seeking something rooted in the old school, while giving it a fresh and innovative spin should give this one a shot. – Kyle McGinn (Bedsore on Facebook) 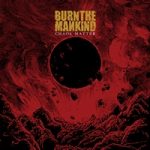 Burn the Mankind – Chaos Matter (Emanzipation Productions)
With four new songs and three live tracks, Chaos Matter leaves a strong reminder of Burn the Mankind’s assaulting approach to death metal. It’s straight-forward, pulls no punches, and revels in that timeless feeling from the early ’90s. “Weigh Like Lead” takes the crown, with a much slower tempo but one that’s really crushing in tone. Some of the sound isn’t the greatest in the live tracks, but it’s still an added bonus to sit alongside the four new ones and gives fans more to chew on. – Kyle McGinn (Burn the Mankind on Facebook) 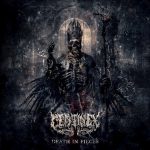 Centinex – Death in Pieces (Agonia)
Venerable Swedish death metal troupe Centinex hit the 30-year mark, which would be a true milestone had they not split in 2006, then reformed in 2014. Nevertheless, their position largely secure as one of Swedish death metal’s most unsung and dependable bands, Centinex continues to churn out brutal, no-frills material. Death in Pieces, the band’s first since 2016’s Doomsday Rituals, dices and slices as it should, driven by heads-down plungers such as “God Ends Here” (such a great title) and “Pieces,” which, in its groove-laden glory, slays. – David E. Gehlke (Centinex Facebook) 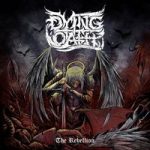 Dying Oath – The Rebellion (Self-Released)
A short three-song EP, The Rebellion is a bit rough around the edges but offers some future promise for this metalcore act. The biggest plus is the catchy melodies, even if they are a little buried by some of the production issues. “Modern Testament” in particular has some great, memorable riffs and upbeat tone alongside an enjoyable melodic solo. The clean vocals could use a little bit of polishing up – the rasps fit the music well but the cleans sometimes feel too ‘clean’ for the overall approach being used. A wait and see type of release for sure. – Kyle McGinn (Dying Oath on Facebook) 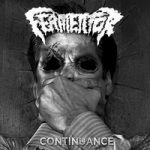 Fermentor – Continuance (Self-Released)
Nothing but guitar and drums with two-man act Fermentor. Instrumental death metal has swung into various directions over the more recent years, and Fermentor plays it in a way that provides an extra emphasis to their more exotic riffs. The speed can be often frantic, but they do a nice job of ensuring that it sounds different. Whether it’s with some inspired riffing or quick tempo change-ups, it stays fresh for the most part. Some fatigue may set in with the last few tracks, but aside from that there’s a number of riffs to really dig into and appreciate over time. – Kyle McGinn (Fermentor on Facebook) 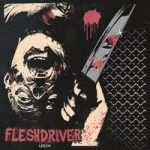 Fleshdriver – Leech (Redefining Darkness Records)
As soon as the music starts and the HM-2 pedal hits, you know exactly what you are going to be in for here with Leech. There’s nothing particularly wrong about Fleshdriver’s approach to the format, but there’s nothing that really stands out from the pack either. The songs stick to the usual combination of mid-tempo crunch with some melodies woven into it, and some change-ups in tempo along the way. The problem is that there are so many bands doing this that Fleshdriver’s middle of the road take isn’t helping them stand apart from the norm. For diehards only. – Kyle McGinn (Fleshdriver on Facebook) 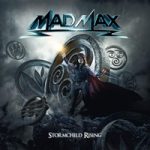 Mad Max – Stormchild Rising (Steamhammer/SPV)
Present in the hard rock/metal scene since 1981, Mad Max keep chugging along in their lane for their 14th studio album Stormchild Rising. These Germans have a comfortable sound that has basic melodic hooks, singalong choruses, and solid songwriting mechanics just like Kiss, Def Leppard, and a mix of the Scorpions/ Judas Priest when they wish to turn on that charm. Bluesy efforts like “Gemini” and the driving “Talk to the Moon” keep the proceedings sharp and on point, plus added support from Paul Shortino on the Rough Cutt cover “Take Her” and guitar break support from Stryper’s Oz Fox for “The Blues Ain’t No Stranger” showcases musical mentor support. The 80’s spirit is alive and kicking here. – Matt Coe (Mad Max on Facebook) 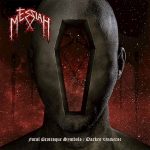 Messiah – Fatal Grotesque Symbols (High Roller)
Buried on the waist-deep Noise Records roster in the early 1990s, Switzerland’s Messiah came in at the back end of countrymen Celtic Frost and Coroner’s success. While Messiah sounds nothing like either, they were often guilty by association, creating unrealistic expectations for a band, who, for all intents and purposes, was better than advertised. As a precursor to their first studio album in 26 years, Fracmont, Messiah is issuing the three-song Fatal Grotesque Symbols EP. It’s a meaty slab of death-thrash with no onus on one or the other — Messiah still rests comfortably between the two, aided by Andy Kaina’s still abyss-ready bellow. – David E. Gehlke (Messiah Facebook) 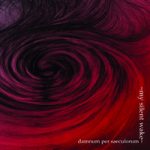 My Silent Wake – Damnum Per Saeculorum (Opa Loka Records)
More of an ambient and experimental release from the band, which they have an entire series of at this point, Damnum Per Saeculorum isn’t exactly a metallic venture. Instead, medieval and folky vibes, as well as esoteric and atmospheric melodies weave their way through the tracks. While some melodies are good, and the mood is strong, 66-minutes of this is a bit overbearing and starts to become boring if you aren’t listening to it as background music. But if you are looking for something different, it can’t hurt to give it a shot. – Kyle McGinn (My Silent Wake on Facebook) 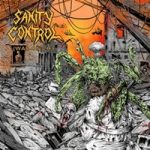 Sanity Control – War on Life (Seeing Red Records)
Two years into their existence, Sanity Control aims to infuse their brand of crossover hardcore/thrash to whoever will appreciate the firepower for War on Life. Eight quick hitters in under twenty minutes – this Polish quartet delivers a raw brand of music full of chunky riffs, lightning-fast transitions, energetic drumming, and a roaring vocalist with that menacing hardcore delivery to light up any crowd. D.R.I., Nuclear Assault, and Excel come to mind more than say Municipal Waste when airing the mid-tempo stomp-fest for “Rope” or the uppity onslaught for “Good Dogs”. By the final salvo “Dying Order”, most will just press play again for a return engagement in brutality the old school way. Circle pit people, here is your ideal soundtrack. – Matt Coe (Sanity Control on Facebook) 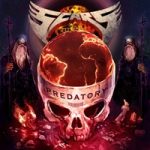 Scars – Predatory (Brutal Records)
Returning after a ten-year hiatus, Brazilian thrash band Scars release a new full-length record for Predatory. Featuring nine new tracks and two additional bonus singles they released over the last two years, the quintet has a very raw, mid-tempo based approach to their groove/thrash style. Intertwining a mix of Teutonic and US influences, thinking everything from Destruction to Grip Inc. and Death Angel or Exodus – songs like “These Bloody Days” and “Ghostly Shadows” promising headbangers with intricate/technical lead break mechanics. Vocalist Regis F. has a barking roar delivery that has a hit or miss quality and could be the component that stops some from full approval. Above average musicianship and technical prowess gives Scars a leg up on most. – Matt Coe (Scars on Facebook) 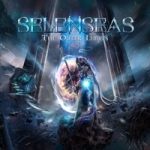 Selenseas – The Outer Limits (Rockshots Records)
Evolving material from their native Russian tongue into this English-sung album, The Outer Limits from Selenseas contains uplifting power metal with rejoiceful melodies, catchy guitar riffs, and steady tempos that align well with most of the veterans in this style. Intertwining aspects of progressive, folk, and doom/epic strains into this platform, songs like “Asgard” convey a Manowar feel, whereas “Hope” and “The Mirror” possess the galloping, triumphant nature that resembles Sonata Arctica, Edguy, or even Iron Maiden. Spirited, emotive lead breaks as well as an expressive, Bruce Dickinson meets bard-esque vocal delivery keep the interest level on high track to track – the band unafraid to inject choirs, acoustic embellishment, or layers of momentum building instrumentation to achieve the proper outcome. The natural drum hits are a refreshing human touch as well – keep Selenseas on your radar screen if you love the power genre at all. -Matt Coe (Selenseas on Facebook) 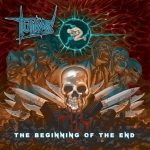 Tulkas – The Beginning of the End (Noble Demon)
With ten years and two studio albums to their credit, Mexican thrashers Tulkas return with a five-song EP The Beginning of the End. Slicing and dicing through ripping vocal work, crunchy and fierce rhythm guitar play, and frantic bass/drum action – songs like “O.G.C. (Outsider God Creation)” and “Extinction” get the blood flow elevated, in a way like Overkill, Death Angel, Heathen, adding a bit of younger Havok energy to the proceedings. Sophisticated shred/neoclassical lead works and bass mechanics that add another progressive aspect keep Tulkas sharp – the “Shortest Straw” / Metallica cover a fitting ending for the record. Keep things primed and ready for hopefully a blistering follow-up full-length, as these gentlemen know their way around the thrash genre. – Matt Coe (Tulkas on Facebook) 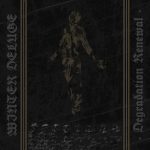 Winter Deluge – Degradation Renewal (Osmose)
New Zealand’s Winter Deluge — featuring the brothers Baylis (Aaron on guitar; Nathan on drums) — is blast-attack black metal 101. Don’t come looking for variation here for it’s not going to be found, but, rather, some rather swirling riffs that amount to an aural bombardment. Due credit to the band’s savory riff tactics, some of which can run neck-and-neck with other luminaries such Aura Noir and Impiety. Of course, blast-attack black metal runs the risk of too much of one thing, of which Degradation Renewal occasionally suffers. Then again, speed still counts for something. – David E. Gehlke (Winter Deluge Bandcamp)