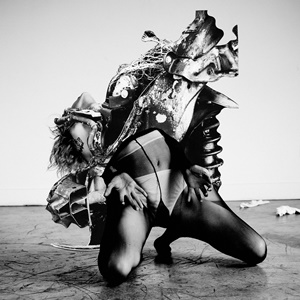 Industrial metal and electronic/synth music in general hold a special place in this writer’s musical landscape. That late 80s/early 90s vibe of industrial metal’s prime still sounds just as beautifully crushing today as much as it did back then. It is, however, harder to make one’s mark these days than it was over 30 years ago.

Enter Black Magnet. A solo project by James Hammontree, Body Prophecy is their second full length release, following up 2020’s Hallucination Scene. After listening to this album on repeat listens, it breeds a lot of familiarity, as well as a little nostalgia. The big question is this: can Black Magnet carve out a niche of their own?

The proceedings begin with “A History of Drowning,” which immediately reminds one of early Nine Inch Nails; specifically Broken and The Downward Spiral era. Not a bad start, with a slick and crushing tempo, complimented by a heavily distorted vocal attack. “Violent Mechanix” follows, and if anyone here is a fan of Al Jourgensen’s work, then welcome home! The Ministry vibes are almost eerie. “Floating in Nothing” gives off a bit of a NIN and Godflesh mix, with a grimy quality that gives off the aura of a dark and dingy club.

“Incubate” slows the pace, but ups the ferocity, resulting in one of the more unique tracks on offer, showing Hammontree’s chops in a more defining light. “Hermetix” continues the mid-paced tempo, with a sinister beat that really drives this track home, complemented by a Manson-esque cleaner vocal attack that reminds one of something from Mechanical Animals. “Wolverine Dreams” is one of the shorter tracks on the album, but also one of the heaviest, upping the pace and smashing up the joint with a Godlfesh-like gusto. Other tracks such as “Body World” go right back to old school NIN territory, while “Last Curse” is Ministry through and through. The last track is a remix of “Incubate” by Godflesh’s own Justin K Broadrick, giving an alternate viewpoint on the track that is beautifully ominous, resulting in one of the best songs on Body Prophecy.

The production is rough around the edges, dirty, and suffocating – just as a good industrial metal album should be. If you’ve partaken in this style before, this will all sound very familiar, as Body Prophecy doesn’t stray far from the classics. Don’t expect to be too surprised – this will either scratch right where you itch or feel like something you’ve popped into your old Walkman a few decades ago. Body Prophecy is also a quick 35-ish minutes in length, with many songs under the 3-minute mark. It’s a bit brief, but it works just fine.

If 80s/90s industrial metal is your thing, you’ll have a lot to like here, but large chunks aren’t anything that haven’t been done before. Nothing wrong with that, mind you – Hammontree is obviously passionate about this style of music, and he’s got the sound and aesthetic down pat. Black Magnet isn’t all the way realized yet, as there’s something bubbling under the surface that could turn into more of a signature sound, and less of a love letter to the early days of industrial metal. Songs like “Incubate” and “Wolverine Dreams” give a glimpse of putting a unique spin on things, and that’s what this writer really wants to hear more of on the next album. There’s a lot to enjoy – the potential is obvious, and we all shall see what road Hammontree takes next.