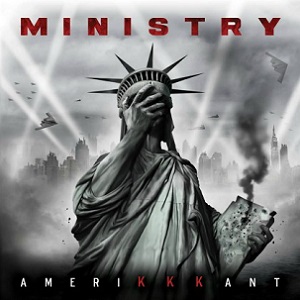 Ministry’s “supposed” 2013 swansong From Beer to Eternity should have been the last we’ve heard from Al Jourgensen and company and for good reason: It was, for lack of a better term, quite awful. The metal world has completely passed Jourgensen by, no matter how groundbreaking his work was in the late ’80s and early ’90s. Sure, their Bush-hating era (2004’s Houses of the Molé in particular) was of mild humor and substance, but beyond that, Ministry has largely been past their time, which makes the results on their latest comeback album,AmeriKKKant all the more predictable.

Now taking on Trump, Jourgensen’s barbs and attacks toward the man may have their intended effect on the band’s audience, but beyond that, they’ll fall flat fairly quickly. (DR is not a political website, by the way.) In doing so, Jourgensen leaves a lot of the work up to samples and various guest appearances, including longtime collaborator Burton C. Bell of Fear Factory. The harmonica-infused, drum-and-bass heavy “Twilight Zone” is tolerable because of its simplistic, but effective main riff, but the repetition and tired themes across “Victims of a Clown,” “We’re Tired of It” and “Wargasm” are indicative of a band simply going through the motions, just with a new message applied.

The cycle of Al declaring Ministry dead, then doing a farewell tour, then reviving the band, then doing a side project (see: Surgical Meth Machine), then recording another album seems likely. All this has further diluted the Ministry name, one that once stood for industrial metal innovation. Albums like AmeriKKKant couldn’t make Ministry any less relevant.