Ronnie James Dio is in the house…sort of. There is no better Dio vocal impersonator than Astral Doors’ Nils Patrik Johannsson, a man whose bread and butter is doling out vocal licks that are eerily reminiscent of when Dio was in the throes of singing

about kings and queens who blind your eyes and steal your dreams. In turn, it has worked wonders for Astral Doors, who have gradually built a nice body of work for themselves in Europe, especially with 2007’s flashy New Revelation. With the conceptual Jerusalem, the Swedes hit the mark again in a roundabout sort of way.

Perhaps this is nit-picking (or the result of having been in the same room with countless drummers), but the bass drum sound on Jerusalem is quite annoying. In most cases, engineers will add some type of effect to the kick drum as means of beefing up its sound, so it’s with a little bemusement that Astral Doors allowed for drummer Johan Lindstedt to keep his kick natural and clicky-sounding. It’s a major distraction, frankly.

Kick drum issues aside, Astral Doors know how to write a compact song when they need to, and they’re usually catered around Johannsson’s vocals. “Child ofRock ‘N’ Roll

” heads right into Last In Line Territory, a song

that could not be more based off Dio if it tried, while “Pearl Habor” benefits from mounds of guitar harmonies. From there, the traditional metal forays the band takes are largely effective, with “Babylon Rise,” “The Battle of Jacob’s Ford,” and “The Day After Yesterday” emerging as the cuts worth taking note of, particularly when Johannsson lets it rip.

No one else really jockeys for Dio-related metal like Astral Doors, and while that sentiment is easily the most prevailing one, the band’s battled-tested approach on Jerusalem works well in their favor. Long live Dio ‘n’ roll! (And Astral Doors) 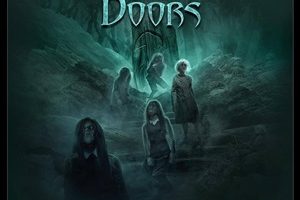