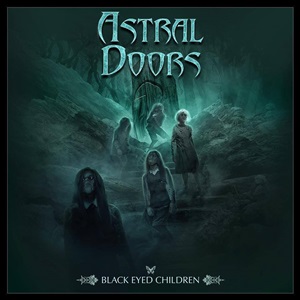 Singer Nils Patrik Johansson gets around – his work heard for two decades plus between neoclassical progressive metal for Richard Andersson’s Space Odyssey, power/progressive/folk metal for Wuthering Heights, to even straightforward power through Civil War. Yet his most prolific recording endeavors reside in Astral Doors – recording albums since 2002 with the group, of which 2003’s Of the Son and the Father and the follow up Evil Is Forever are mandatory Dio-esque affairs. Although steering the ship into modern pastures with less than ideal results for Requiem of Time, the last couple of records have fallen more in line to conventional heavy, power metal AD – leading most to believe that this eighth studio record Black Eyed Children should not stray far from the familiar.

The burly, mountain-side melodies out of Nils obviously become as much of a focal point as the twin guitar rhythms/harmonies, Hammond organ supplementation, and solid rhythm section action. Joachim Nordlund and Mats Gesar peel off classic metal riffing and killer lead breaks worthy of investigation during “God Is the Devil” and “Lost Boy” that bring Rainbow/Black Sabbath/Savatage moments to a new generation. The sextet excels in the occasional epic arrangement, building up all the emotional twists and turns for the nine-minute plus “Black Eyed Children” title track, featuring a fiery instrumental break in the mid-section and Nils lower to Ronnie James-oriented high octane capacities. Throwing in pulpit-narrative elements for the “Jesus Christ Movie Star” bonus cut, church-themed keyboard passages from Jocke Roberg on “Die on Stage” as well as tender acoustic interplay through the opening of “Suburban Song”, and you have the makings of Astral Doors using dynamic abilities to keep these latest ideas moving along seamlessly, with little doubt of being stuck in a rut.

In the metal world, there are many bands who churn out consistently what their fans expect – establishing their parameters early on and rarely varying course. Almost like what Steel Dragon would do in the Rock Star movie – that’s what should be expected on Black Eyed Children, another good to great offering that summons up that 1975-1984 era for Blackmore/Iommi/Dio fans to treasure.