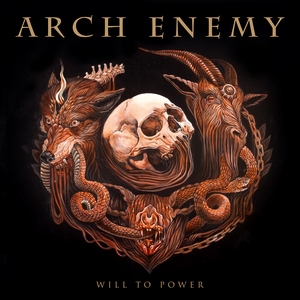 After the revitalization that was 2014’s War Eternal, easily the band’s strongest effort in quite some time, things seemed to be getting even better for Arch Enemy. Most fans seemed to embrace the vocalist switch over to Alissa White-Gluz (odd only because most veteran acts of this caliber rarely have such a smooth transition) and before 2014 ended, the band had acquired former Nevermore shredder Jeff Loomis on guitar. Much touring has occurred between then and now, arguably strengthening the comradery of Arch Enemy era 3.0 – so it’s only logical that that this star-studded line-up will take their 10th album into the stratosphere, right?

Against all high expectations, Arch Enemy succeeds in delivering an album that not only focuses on all their strengths, but even allows for some evolution in their sound that long-time fans should approve of. The sheer diversity from beginning to end is one of the key factors of success here. After an effective instrumental builder, “Set Flame to the Night,” opens the album, “The Race” acts as an ironclad battering ram set to blow the speakers. A true stomper, it’s downright brutal but still allows for Arch Enemy’s glistening melodies to shine through. Following that, while maintaining momentum, are “Blood in the Water” and “The World is Yours,” which are more traditional AE faire, focusing on hyper-catchy melodies and glorious leadwork intertwined with anthemic riffing. Traditional, but strongly satisfying due to an absurd level of polish and energy.

After a few ‘raise the flags’ type barnburners, the band switches the attack into more emotive terms. “The Eagle Flies Alone” slows down into the mid-tempo, offering up even more melodic leads that shine atop a growl-along chorus. But if one track is going to shock, it’s “Reason to Believe,” an Arch Enemy ‘ballad’ that contains a significant amount of clean vocals at the forefront (some sparse cleans do appear in a few other songs in a backing sense). A big curveball, but one that is handled with grace. Those familiar with White-Gluz’s work in The Agonist know she can belt out some melodic vocals as well as she can unleash the inner demon and it’s a nice turning point in the album.

Things seem to get notably darker in the second half, and it’s here that White-Gluz really shines with her growls, which sound, at times, even more menacing than on War Eternal. Whether it’s the more frenzied “Murder Scene,” crushing groove of “First Day in Hell,” or a return to the more emotive with “A Fight I Must Win,” you can hear her pushing to hit the right sonic approach. This brings us up to Jeff Loomis’ role on the proceedings. While it’s a bit perplexing that he wasn’t involved in the writing process (perhaps we’ll see more next time, as we did with White-Gluz here), you can certainly hear him loud and clear in some of the leadwork. On that note, consider the flashy guitar heroics of “Dreams of Retribution” to be the high water mark, with Amott and Loomis performing some particularly drool-inducing stuff.

With each successive listen, there’s something new to absorb and delight in with Will to Power. Each song is cohesive, yet brings enough to the table for an individual dissection and thorough investigation to occur. But as a sum total, Will to Power feels like Arch Enemy turned up to 11. All of the things you’ve come to love about the band focused and polished to perfection, but done with the hunger of a younger band that is still willing to test the waters a bit. The quintessence of melodic death metal circa 2017.