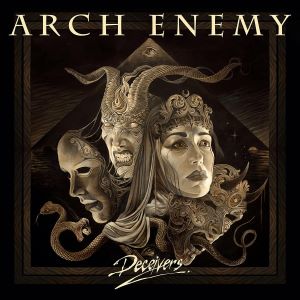 Arch Enemy’s last album, Will to Power, was released in 2017.  The band did some very heavy touring in support of said record, but with COVID and everyone staying out of the live venues for a significant period, Arch Enemy’s absence was noticeable.  Perhaps that’s why the first single for Deceivers, “Deceiver, Deceiver,” was released way back in October 2021.  So fans have been getting some tastes of the new material for close to a year, meaning that many will be hotly anticipating what the all-star talent in Arch Enemy can come up with for their eleventh album.  Short answer, nothing revolutionary but very much true to form and enjoyable.

Given that this is the band’s eleventh overall, and third since their last vocalist swap where Alissa White-Gluz (guitar hero Jeff Loomis also joined the band later that year in 2014), there’s a pretty good idea of what to expect with Deceivers.  Arch Enemy runs their usual gamut of melodic death metal ferocity, with glorious shredding guitar melodies leading the way, as the tempos go from high octane and thrashy to more mid-tempo anthems and slower groovy tracks.  Not to mention the usual indulgence in a short instrumental, with “Mourning Star” fitting the bill this time.  There’s not a lot of surprises to be had, other than perhaps the effectively used clean vocal passages of “Handshake with Hell,” but what matters is that each of these tracks are quite packed with energetic and/or earworming riffs and melodies that don’t have to work too hard to get stuck into your head.  “House of Mirrors” guitar melodies all but dance around the room while White-Gluz dresses them up with some fiery growls in the chorus.  Her vocals sound stronger than ever, even without dipping too much into clean territory – they feel full and aggressive, offering a nice contrast to the often glorious and epic melodies that Loomis and Amott dole out like they are going out of style.  “In the Eye of the Storm” is probably the strongest barnburner sing-a-long, with strong grooves and a ridiculously catchy chorus, whereas early single “Deceiver, Deceiver” unloads the most galloping thrash that will surely whip you into a headbang with ease.

While surprises are few and far between, Deceivers is an aggressive wake up call for long time fans.  Arch Enemy has returned and are firing on all cylinders.  There’s a reason that Arch Enemy is so permanently associated to top-tier melodic death metal, and this album is simply one more brightly colored feather in their cap.  It may not change any opinions people have about them, but it’s a fun romp for those interested.