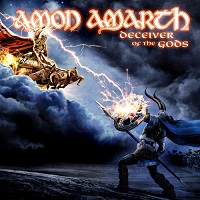 Amon Amarth is a band that exudes rare strength and power in a way that almost feels tangible and transferable.  Similar to the way a fiction reader can transpose himself into the protagonist and live the adventure contained in the pages – all from the comfort of modern-day planet Earth.

Deceiver of the Gods is the ninth album in Amon Amarth’s massively successful career.   Going back to their debut full-length way back in 1998, these Swedes have been regularly delivering crushing but victorious anthems entrenched in Viking and Norse mythology.  True to form, they are at it again with another fine release of evocative songs of might, war, vengeance, bravery and lore – put forth in the savagely melodic manner that has made Amon Amarth a global giant in metal for the last decade.

As implied above, I don’t think you’re going to find anything particularly surprising with this release, but chances are you’re not really seeking that in a new Amon Amarth album, anyway.  The old adage “if it ain’t broke…” and all that.  One, though, that immediately stood out to me is the guest appearance of legendary Candlemass singer Messiah Marcolin, which is fantastic.  Hearing his operatic voice layered against Johan Hegg’s bestial growl adds new depth to the experience that I had not previously encountered with the band.  This song, “Hel,” is certainly a highlight.

Right from the beginning – from the title track, Fredrik Andersson’s massive sounding drums grabbed me and locked me in for this ride.   I was aware right away that I liked the production on this record, which, as with any album, plays a key role in the way an album makes you feel (Swedish Grammy award winning producer Andy Sneap here).  Another thing Amon Amarth does well is to create atmosphere.  Deceiver of the Gods drips heroic atmosphere and melody, while never taking the foot off the throat (before smashing the enemy’s face into bloody bits of teeth, bone and victory, of course).  A resounding win.