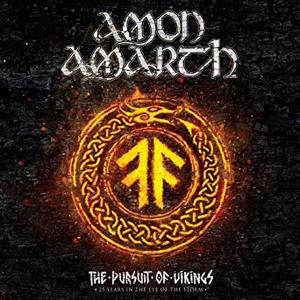 The 25 year pinnacle is not one that every band manages to achieve. Add to that the number of bands that are still arguably at the top of their game by that particular milestone, and it’s an even smaller number. If there’s been a band within extreme metal in more recent years that has aged gracefully as well as continued to expand and conquer with each new release, Amon Amarth have to be one of the first bands to come to mind. To celebrate 25 years, the band not only packs on two full-length sets from Summer Breeze 2017 but a full-length documentary as well.

Given this is something that’s more for the die-hard fans than anyone else, it seems more worthy to discuss the documentary. The two Summer Breeze sets are fantastic and show the band doing what they do best, with an almost excessive amount of material to take in. The shots are high-quality and easily worth the price of admission. But the documentary takes things a step further. An enjoyable trip through time with the band, there’s a lot of chat with the main members as they go through from the band’s drunken beginnings, obstacles in the way (and how they almost folded at one point), to their more current successes. There’s not time enough still to talk about everything in detail (line-up changes are a large omission here it seems) but there’s quite a bit of talk outside of the band as well, including a number of Metal Blade personnel, large European festival folks (Wacken, Bloodstock, Summer Breeze), producer Andy Sneap, and even some fan perspectives on the act. It all makes for some interesting discussion, particularly the band’s embrace of the Viking theme and their attempt to distance themselves from the political implications of the time, and the stories behind some mishaps on their first Metal Blade record, Once Sent from the Golden Hall.

There’s much info and music to take in for Amon Amarth fans with The Pursuit of Vikings. A celebration done right, there’s a lot of notable TLC that has been given to not only the live release but the documentary itself. Something that in and of itself, could intrigue those who might fall outside the band’s target audience (who will undoubtedly eat this all up with glee).