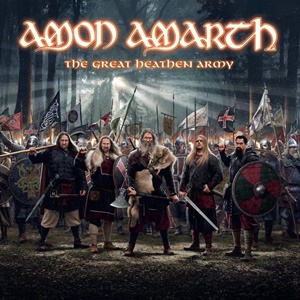 Undisputed leaders in the Viking-oriented melodic death metal scene, Amon Amarth conjure up those old school battlefields where swords, shields, and mighty warriors battled for pride, freedom, and territory. Off the road for a year because of the pandemic amid supporting their last album Berserker, the quintet would pivot back to the studio for this twelfth record The Great Heathen Army. Andy Sneap returns as producer (last working with the band on Jomsviking back in 2016), the songs taking on a more inspirational, bravery, and determination aspect with the lyrical content, using mythology/history as the backdrop for vocalist Johan Hegg and his musical compatriots to drive this material forward.

Much of the main hooks and compositions possess a lot of classic, melodic hooks and runs that revert back to the early metal prototypes, pushed through the death metal veneer that has been a staple of the quintet’s style. Steady double kick/snare combinations, churning/cultural riffs, plus the deadly, savage Hegg vocalization comes out all guns blazing for the opening anthem “Get in the Ring”. As guitarists Olavi Mikkonen and Johan Söderberg always align well for crushing rhythms, effective aural counterpoint shifts as well as solid lead break activities that punctuate key signatures or themes on hand. Check out the vicious, speedy assault throughout “Oden Owns You All” or the slower marching gallops next to circular melodic picking measures for “Skagul Rides With Me” as two specific headturners to the memorable axe action. Those who enjoy the community, shake your fist or row your oars into shore sequences will find plenty to appease themselves during the mid-tempo riffs plus main vocals / background gang choir action during “Find a Way or Make One”, the instrumental section tantalizing in an old school Iron Maiden-like scope. Speaking of British metal veterans, the band gains a veteran vocal powerhouse in Saxon’s Biff Byford for the appropriately attacking “Saxons and Vikings” – the front half speedy melodic death, while Biff comes in for the second verse/bridge soaring to the heavens, listeners imagining the charge of both parties clashing to establish presence in the hopes of victory.

Distant guitars signal the start for the longest track of the record, the six-minute plus “The Serpent’s Trail”, Johan taking on his narrative voice to ‘cross the Golden Bridge’, while his blackened screams pierce the concluding riffs that fade into final glory. The cover art sees the musicians in animated form, and Andy’s seasoned production chops give the band that robust fullness these songs deserve – sure to be cranked at peak volumes. At this point in their career, Amon Amarth have established their niche and just continue to dial deeper into the best hooks, melodies, and stories that their followers crave. The Great Heathen Army succeeds in adding more high-quality tracks to the already incredible catalog for the band – ready to conquer more stages far and wide.