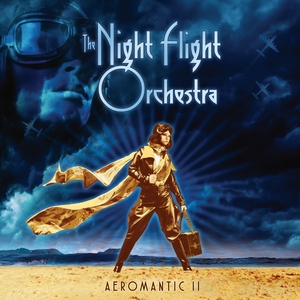 This one probably comes as no surprise to any avid DR reader, as any new Night Flight release seems to hit in everyone’s sweet spot even if it doesn’t resemble metal in the least.  There’s something to be said for the band’s ability to capture the essence of ’70s/’80s rock and make it into something that feels just as magical and fresh.  Aeromantic II is a real gem, much like the band’s entire discography.  One of the most incredibly consistent acts going at the moment, especially considering how prolific they are.

What else can really be said about the prolific retro rockers of The Night Flight Orchestra?  Their ability to produce addictive classic rock hits on an almost annual basis is uncanny, particularly with the level of polish and joy to them.  Aeromantic II, much like it’s predecessor from last year, delivers some ‘instant classics’ from start to finish, hitting the nostalgia button while still propelling the band forward.

Passion and dedication to their version of classic rock results in why The Night Flight Orchestra are the best at what they do.  Aeromantic II continues to raise the high bar that the band has set for themselves in providing a listening experience that takes you out of the moment and into a delightful and upbeat paradise of good ole-fashioned rock fun.  Hit play and let yourself be swept away!