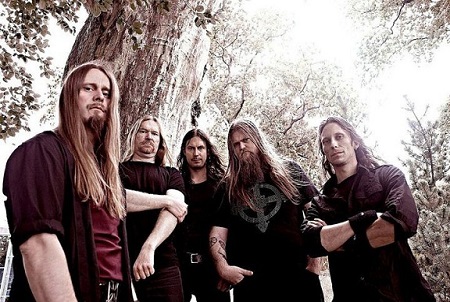 Fan-filmed live video of Norwegian progressive black metallers ENSLAVED performing on March 19 at Corporation in Sheffield, United Kingdom has surfaced and can be seen below. The veteran quintet play “Allfǫðr Oðinn”  off their “Yggdrasil” album and cover LED ZEPPELIN’s, “Immigrant Song” in a psychedelic fusion.

ENSLAVED’s twelfth studio album, “RIITIIR”, sold roughly 2,300 copies in the United States in its first week of release, landing at position No. 8 on the Top New Artist Albums (Heatseekers) chart. Essentially, the Heatseekers chart lists the best-selling albums by new and developing artists, defined as those who have never appeared in the Top 100 of The Billboard 200. The five-piece’s previous album, “Axioma Ethica Odini”, opened with 1,400 units back in September 2010 to debut at No. 16 on the Top New Artist Albums chart.