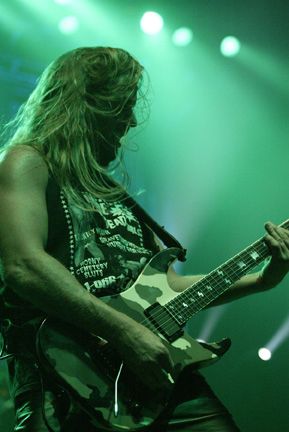 According to reports: SLAYER is devastated to inform that their bandmate and brother, Jeff Hanneman, passed away at about 11AM this morning (May 2nd) near his Southern California home. He was 49. Hanneman was in an area hospital when he suffered liver failure. He is survived by his wife Kathy, his sister Kathy and his brothers Michael and Larry, and will be sorely missed.

Hanneman — who in January 2011 contracted necrotizing fasciitis, likely caused by a spider bite, and has been undergoing surgeries, skin grafts and intense rehab since — spoke to U.K.’s Classic Rock magazine in December 2011 about his recovery which has seen him sit out an entire two years’ worth of touring with the band.

Hanneman was kicking back in a hot tub with a couple of beers when noticed a spider bite him on the arm.

“Didn’t even feel it,” he said. “But an hour later, I knew that I was ill.” On his way to the hospital, “I could see the flesh corrupting,” he recalled. “The arm was real hot. I got to the emergency room, and thank god the nurse knew straight away what it was. By chance, although it’s pretty rare, she had seen a case a little while before. At that point, I was an hour away from death.”

Although the spider bite itself was not serious, it had caused bacterial infection in the deeper layers of the skin and tissues of the arm.

Hanneman underwent emergency surgery to remove the dead and dying tissue. The doctor was able to save the muscles and the tendons, but the guitarist had a large open wound on his arm. He spent the next two months in hospital, having extensive skin grafts and heavy doses of antibiotics to suppress the infection.

“I had to learn to walk again,” Hanneman said: “I hadn’t stood up for a month, apart from anything else. The skin grafts were very painful and all the muscles and tendons in the arm where very weak. That was ok though. I count myself lucky that the nurse and doctor knew right away what had happened to me, because things could have been a whole lot worse.”