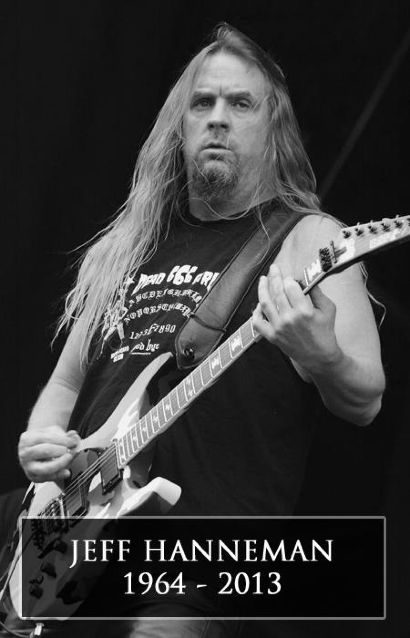 USA Today has issued a report on the origins of SLAYER guitarist Jeff Hanneman’s spider bite. Hanneman passed away on May 2 due to complications from liver failure. Here’s the report:

Jeff Hanneman thought he was on the mend after a spider bite followed by an infection. He’d been writing songs with the band in anticipation of recording a new album later this year.

But in an unusual chain of events, a representative for the band said the bite may have contributed to Hanneman’s death more than two years later.

Hanneman died Thursday morning of liver failure at a Los Angeles hospital with his wife, Kathy, by his side, according to Slayer spokeswoman Heidi Robinson-Fitzgerald. He was 49.

Family members and doctors were not immediately available to discuss the cause of death.

Robinson-Fitzgerald said Hanneman had been slowly recovering from necrotizing fasciitis, a flesh-eating disease that nearly cost him his arm. Such an infection can develop from a minor cut or scratch; Robinson-Fitzgerald blamed the spider bite, for which he failed to seek immediate treatment. She said he was bitten while in a friend’s hot tub.

Infections by flesh-eating bacteria are rare. The affliction can destroy muscle, fat and skin and may require surgery to remove the diseased tissue to save a patient’s life.

Hanneman had several operations to remove dead and dying tissue from his arm, the band said on its website last year.

It’s unknown if Hanneman was bitten by the dangerous brown recluse spider. Robinson-Fitzgerald said the spider that bit the Slayer guitarist was never recovered.

The government estimates roughly 750 flesh-eating bacteria cases occur each year, usually caused by a type of strep germ. About 1 in 5 people with the most common kind of flesh-eating strep bacteria die.