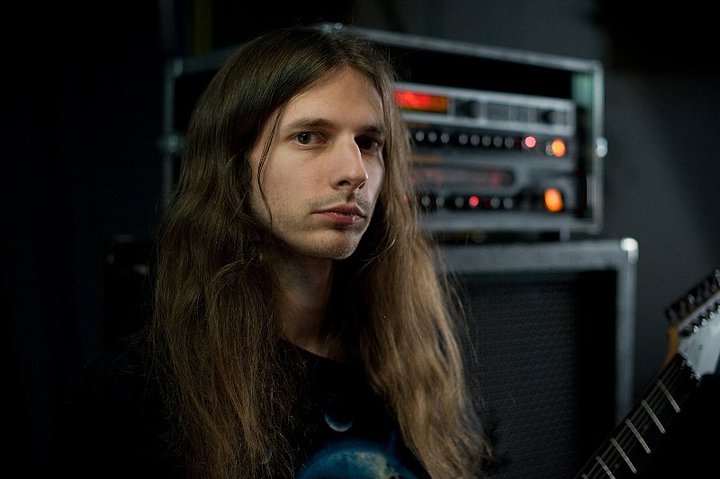 OBSCURA guitarist Christian Muenzner (also of SPAWN OF POSSESSION, PARADOX, ex-NECROPHAGIST) is currently working on his second all-instrumental solo album, following his 2011 debut album, Timewarp. The new effort will be entitled Beyond The Wall Of Sleep and will feature the OBSCURA rhythm section of Hannes Grossmann on drums and Linus Klausenitzer on bass, as well as keyboard virtuoso Jimmy Pitts (PITTS/MINNEMANN, SPASTIC INK, THE FRACTURED DIMENSION). Estimated release date is around April/May.

Beyond The Wall Of Sleep will contain 11 high-intensity instrumental tracks, and, like Timewarp, will be mixing different genres, such as neoclassical, thrash metal, progressive metal, fusion, ’80s heavy/speed metal and even elements of death and black metal. The album theme will revolve around old mystery stories and supernatural themes, which will also be reflected in the album’s artwork, created, once again, by Anestis Goudas. Some of the songtitles include “Shadow Over Innsmouth”, “Evil Spell (The Book Of Belial)”, “The Pit And The Pendulum”, “Demon’s Gate”, “The Witch Of Endor” and “The Crawling Chaos”.

Comments Muenzner: “The majority of the album is recorded by now. We’re just working on a few guitar overdubs and additional keyboard arrangements, and then the whole thing is ready to be mixed.

“I have been working on the album on and off for most of the last year, whenever touring activities and my busy teaching schedule allowed it. It is also a very important step and personal statement in my career, as about two years ago I was diagnosed with focal dystonia and had to face the possibilty of never being able to play again. Even though I’m still dealing with the condition on a daily basis, I have been able to improve a lot with the help of some great people, without whom this album would never have been possible. It took some time, but I am convinced that this is the best and most intense playing I have recorded up to date.

“Compared to my first album, there is a lot more focus on riffing this time, but also the neoclassical elements and ’80s Shrapnel influences will be more apparent, and it contains some of the best melodies I wrote so far. I think the music is a little bit more straight to the point and in your face, but the album is once again going to include an eight-minute prog epic. In addition, Jimmy, Hannes and Linus have all delivered mindblowing performances. I am very lucky to be able to work with such outstanding musicians.

“This instrumental solo stuff is what I enjoy working on most recently, as it allows me the most creative freedom. I hope that this time I will also get the chance to tour and present the music of both albums in a live format.”