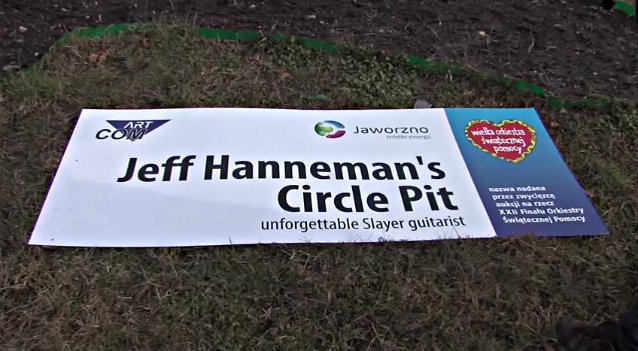 According to CentrumDruku3D, a traffic circle in Jaworzno, a small city in Poland, has been renamed after late SLAYER guitarist Jeff Hanneman. The official sign unveiling, which took place yesterday (Thursday, Febraury 6), was made possible thanks to the Polish company Art-Com Sp. z o.o. (Art-Com Ltd.), which won the charity auction during the world-famous Wielka Orkiestra Swiatecznej Pomocy (Great Christmas Aid Orchestra). For one year, the traffic circle in Jaworzno will be called Jeff Hanneman’s Circle Pit.

A message on the official sign that is displayed at the traffic circle reads as follows:

A two-minute video report on the official sign unveiling from Dla Ciebie TV can be seen below.