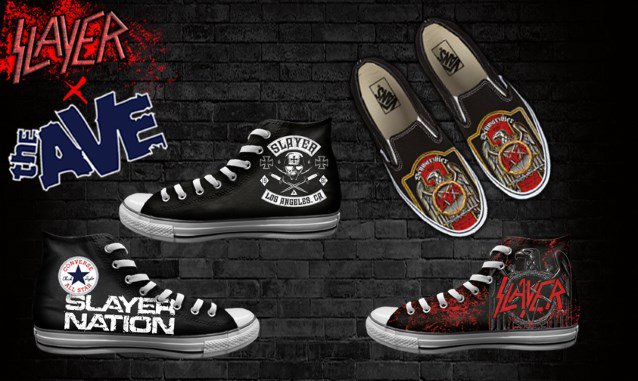 SLAYER has partnered with The Ave, a concept store that delivers unique and legendary footwear. The Ave is offering 18 brand new SLAYER designs on Converse Chuck Taylors and Vans slip-ons. Each shoe is custom made, to order, by a human, at The Ave’s location in Venice Beach, California.
The shoes are ready for order from The Ave’s web store at this location.

The Ave opened on April 7, 2010 by Los Angeles native Nick Romero, who brought on the sharpest, brightest people he could find to run a successful business.

A life-long Converse Chuck Taylor fan, Romero armed himself with a printer that could print on various garment types, including canvas. After countless hours of trial and error, the full concept for The Ave was born. Nick found the perfect location for The Ave in Venice Beach, a place where he hung out regularly growing up, living just a mile away in neighboring Santa Monica (the birthplace of his grandmother and father). Nick was able to get a patent for his device, and soon The Ave became the first and only fully-customizable shoe store.