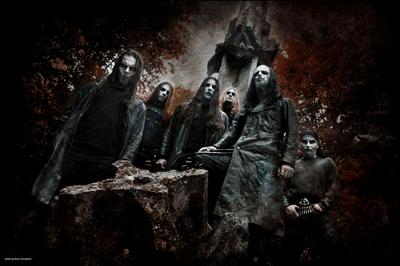 German black metal outfit DARK FORTRESS have issued an update in regards to their upcoming album and follow up to their 2010 effort, Ylem.

Guitarist V Santura states: “The recording sessions for the upcoming (still untitled) new album are finished successfully! I would dare to say that these were the most intense recording sessions in the history of DARK FORTRESS. We put weeks of extremely hard work into this to get as close as possible to what we consider perfection.

Towards the end of the recordings we spent some crazy 14 hours shifts to get every detail and emotion recorded the way we envisioned it. Still, we needed just a few days longer than initially planned, and those few days were missing when I started doing the final mix for the album. After three days into mixing I realized that I only had the choice of either giving away a mix which is not satisfactory or to miss our deadline and push the album release backwards. I never considered this first option a real option, though. We put so much effort into the whole creative process and the recordings that it would be a cardinal sin to spoil this with a half-assed mix.

By now I already have other highly important obligations (recording the new TRIPTYKON album), so we all decided it would be best to give ourselves a short break and to finish the mix later this winter. This, unfortunately, means the new album won’t be out in early 2014 as initially planned, so everything is postponed for a few months. But that way I can promise that you will get to hear the best album possible!”