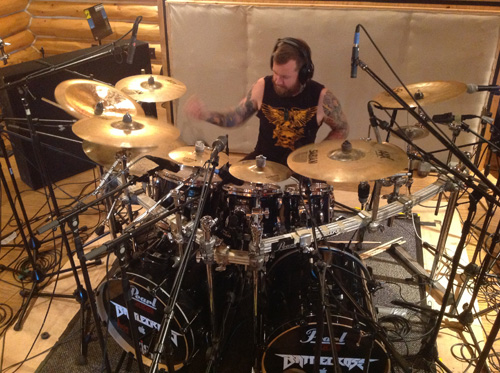 BATTLECROSS has completed work on their sophomore album, which will be due out this summer during their tour as part of the Rockstar Energy Drink Mayhem Festival. Recording has been completed and the finishing touches are being applied to the tracks and art. During tracking, one of metal’s most acclaimed drummers, Shannon Lucas, stepped in as the session drummer for the album.

Lucas comments: “Being a fan of Battlecross, it is an honor to be a part of their new record. I can’t wait for the world to hear this album.”

Producer Eyal Levi adds, “I am so beyond excited for the chance to produce Shannon Lucas on the new Battlecross record. He’s one of the true BEASTS of metal drumming. The man’s skills are literally untouchable. Combine that with a badass rising star of a band and I think we’ve got the makings of a crushing record!”

As previously announced, Kevin Talley will be stepping in to play drums for the band on their two upcoming live performances, the New England Metal & Hardcore Fest (4/19) and the Orion Music & More Festival (6/08-6/09). Drummer Mike Kreger has parted ways with the band to focus on some new opportunities and attend to personal business. BATTLECROSS will announce their new permanent member once a final decision has been made.

The album, scheduled to be released in early summer, also features a guest guitar solo by Producer Jason Suecof, and will be mastered by Joey Vera of Armored Saint. Vera also mastered the band’s cover of Pantera’s ‘Hostile’, which was released as a single last summer.