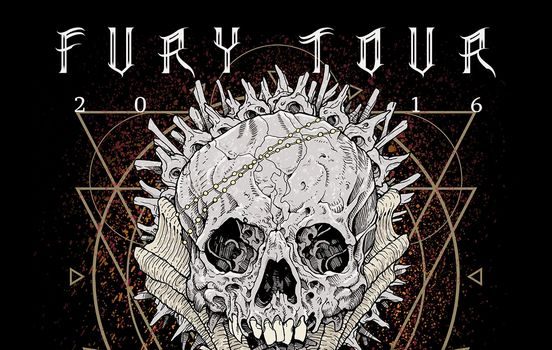 Having headed to the Stanhope House during the summer for a much lower profile show, it was quite the surprise to see that the Fury Tour, comprised of Soilwork, Unearth, Wovenwar, Battlecross, and Darkness Divided, would be making a stop at the excellent, albeit small, venue. However, it had the plus going in of being a very intimate show – which proved quite advantageous.

Having missed the local talent (which started at 2 PM), the first of the bands to hit the stage was Texas’ Darkness Divided. Their sound was that of the tried and true metalcore variety (complete with positive Christian leanings), but the band was effective enough on stage in regards to getting the growing crowd actively involved in the proceedings. Not too reliant upon breakdowns and a few solid solos gave a positive spin to their short set.

Having missed Battlecross on more than a few occasions to date, it was a thrill to finally catch them in the live setting. High-octane thrash at its finest, and with vocalist Gumby currently off the road temporarily, Wretched’s Adam Cody stepped up to effectively fill in and maintained the band’s notable live presence. The band thrashed through an all-too-short set, which included “Flesh & Bone” and “Push, Pull, Destroy,” as guitars Hiran Deraniyagala and Tony Asta (who was celebrating his birthday) fired off frantic riffs and dizzying solos. The crowd really started moving at this point, as it’s not hard to get behind the intense yet fun Battlecross performance.

Admittedly, the DR staff aren’t huge fans of the hard rock/metal act Wovenwar, which was born from the ashes of As I Lay Dying. So it seemed a good a time as any to take a break from the action, though much of the crowd was quite into the act as they pulled forth cuts from their debut and upcoming sophomore effort (“Censorship”). Vocalist Shane Blay did rally the crowd and maintained the energy from the earlier acts, despite this writer’s feeling that most of the material was a bit generic in tone.

It’s been at least 10 years since witnessing Unearth in the live setting, so the nostalgia factor was running high when the band hit the stage. Aiding in this was the band playing some choice cuts of their older material (“Endless,” “Zombie Autopilot,” “This Lying World,” “The Great Dividers”). Unearth has certainly lost no energy over the years, with the guitar duo Ken Susi and Buz McGrath injected tight riffs and monster breakdowns while vocalist Trevor Phipps commanded the stage. The band’s newer songs were just as strong as their old stuff, with “The Swarm” and “Never Cease” being notable highlights. From the moment Unearth took to the stage, they fired up the night’s biggest pit activity (no surprise there) with crowd movement occurring throughout. A clear sign that Unearth, unlike a number of other metalcore acts, still has a strong following and are one of the genre’s rightful leaders.

The tenth time seeing Soilwork in the live arena, this one was undoubtedly the most intimate due to the nature of the venue. No barrier, no space separating the band from the crowd – just a whole lot of Soilwork. The first headlining tour that the band had done since releasing The Ride Majestic, it was nice to see them having the necessary set space to give some better coverage to their venerable amount of material (having seen them twice earlier this year supporting Fear Factory). Mostly sticking to what seems to work for them in the live setting, “The Ride Majestic,” “Death in General,” and “Whirl of Pain” provided some fresh cuts, along with “Helsinki” from the recent Death Resonance compilation album. Tossing “Two Lives Worth of Reckoning” and “Rise Above the Sentiment” in the set also gave a nice flow to some more usual cuts like “Follow the Hollow,” “Rejection Role,” “Stabbing the Drama,” “Overload,” and the thrashy combo of “The Chainheart Machine” and “Bastard Chain.”

There’s a reason that I’ve watched Soilwork so many times though, and that’s their energy on stage. Over the past few years especially, they’ve gotten better and better on stage, and while vocalist Bjorn Strid has a dominating stage presence, Sylvain Coudret is just fun to watch as his facial expressions and antics really elevate the songs with his energy. Guest guitarist Ronny Gutierrez, who also filled for the band’s recent stint with Fear Factory, was another welcome addition and plays off of Coudret quite well. On the drumkit, Bastian Thusgaard (The Arcane Order) has been taking over duties since Dirk Verbeuren joined Megadeth. If this evening’s performance is any indicator, fans should have no worries should he become the official drummer, as he did more than an adequate performance start to finish. The Stanhope House’s smaller setting provided an excellent opportunity to feed off the band’s energy even more than usual, and showed that Soilwork has no signs of slowing down.