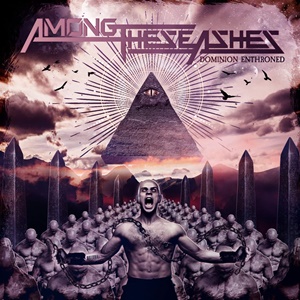 The brainchild of guitarist Richard Clark, Among These Ashes is a five-piece outfit from the Detroit area featuring notable musicians with ties to acts like Battlecross, Traveler, and Finality among others. Dominion Enthroned is the debut album, a thirteen-track conceptual record where a tyrannical sect has stolen America from the people, as Free America attempts to regain their stolen country in a sci-fi dystopian futuristic setting. Probably not as far reaching as you may think down the line – the question is, will the performances match the solid players and enticing storyline put on paper?

Much like what you have heard in the past with great conceptual records in metal’s long history, the record contains a mix of narrative/instrumental sequences spread out at the start, middle, and ending of the record to present context or advance certain parts of the story next to the regular songs. As such “The Culling” starts the record off strong, filled with twin guitar harmonies as well as a jackhammer main crushing rhythm, where Richard and fellow guitarist Hiran Deraniyagala set the atmosphere off for the subsequent crunchy powerhouse “The Dead Beside Us”. Circular guitar runs and varied tempos exhibit a mixture of power, thrash, groove, and even extreme metal elements – while vocalist Jean-Pierre Abbound strides confidently over the top with his stellar pipes and passionate melodies. Many times you feel the band channeling the spirit of Nevermore and Iced Earth when it comes to these crushing rhythms, groove transitions, plus traditional riffs pushed through a lower chugging, darker ambiance – making “The Resistance” and the title track early standouts. The rhythm section of bassist Joe Cady and drummer Kyle Wagner display some faster, aggressive aspects against their normal power duties, adding dynamics to the work of “A Veil of Black” and the eight-minute plus mindbender “Without Wings” (the latter showcasing some melodic death/blackened tremolo action). Often hour-long plus records can be quite daunting to sit through in one sitting – Among These Ashes are acutely aware of this, mixing up the material in such a way that you feel each song has its own feel and atmosphere to make sense, never exhausting the ears.

Imagine a great mix of the first four Nevermore albums, the key Matt Barlow albums during his 90’s run, and some heavier/extreme touches that these players have in their wheelhouse through experience and you will understand the strong appeal for Among These Ashes. Dominion Enthroned isn’t like most first albums to hit the scene – hopefully being the start of a healthy discography as there’s solid talent on display here.