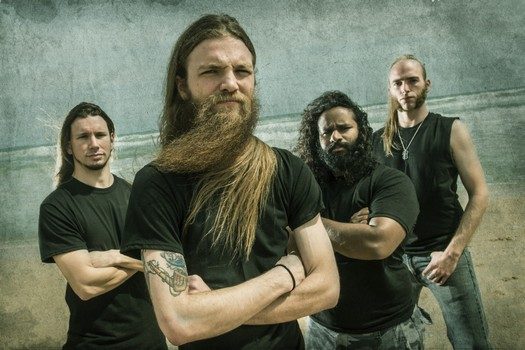 Usually when one thinks of Battlecross at this juncture in time, two things come to mind: hard-hitting thrash, and a true road warrior mentality. Through several full-length records, they have continued to refine their vision of thrash while putting themselves out to the test on the road, making fans night after night the old fashioned way: keeping their energy high and giving the crowd a night to remember.

The band is currently in the midst of their third Winter Warriors tour (which comes almost directly after a support gig for Soilwork). A yearly headlining run that has just as much to do with charity as it does thrash. The band lets veterans in to these shows for free, as well as make donations to various organizations. This time around, the band is on tour with labelmates Allegaeon and Necromancing the Stone, in what promises to be a heavy time to be had by all. We were able to catch up with guitarist Tony Asta before the band took to the stage in Clifton, NJ to chat about the tour, songwriting, and more.

Dead Rhetoric: First off, I know there’s already been some complications on the tour…

Tony Asta: Transportation’s a bitch, for sure. Without going into too much detail…it’s headaches and money, man. The van we’ve had for 5 years just took a big dump. The transmission is gone, the catalytic converter is clogged – it’s just thousands of dollars’ worth of shit. There’s ways around it, but we’d still have to invest money and we’d have to wait. So we got a rental to make these shows. The shows must go on no matter what. Actually, Necromancing the Stone is on their third vehicle and this is the fifth show. They are super troopers!

Dead Rhetoric: Do you find that doing these winter tours is tougher, making it show to show?

Asta: It’s tougher for us, from my point of view, just being in the band. Some people think that I’m all business and it’s fun on stage – which it is sort of that way since I want to make sure things go smoothly. This is the third year that we’ve done the Winter Warriors tour, and we are headlining. It’s tough to be a headlining act when you don’t exactly draw a lot. We draw a couple hundred maximum, unless we are playing in our own region. Back home it’s always hopping, it’s always badass. It’s tough when you have to make ends meet. Luckily for us, on this tour, the shows are connected well and there’s no super far drives between, which is awesome.

When shit happens though, you’ve got to find a way to make it. In November 2011, we thought we had the answer. We financed a brand new van – we pay a monthly payment on it. It’s not cheap, but it’s lasted this long. It’s lasted 5 years and 260,000 miles. So if you compare that to what it would have cost us to rent vehicles or whatever else, it definitely paid off. So we’ll see what happens, but we are here and we are ready to roll.

Dead Rhetoric: You mentioned that this was the third year you’ve done the Winter Warriors tour – what was the band’s thoughts when you put this into motion the first time?

Asta: It’s just fun to go out there and headline and take bands out that you like. That was the thing for me, being a fan of the music and a fan of the other bands. From a management perspective, we like to get people involved. Our manager knows we are very supportive of our vets, so she had the idea of making it based around that, which we were all about. So that’s what started it. We are huge supporters of our vets, so when the idea came out, I was one of the first guys who was like, “Fuck yeah, let’s do it!” We are happy to be a part of the VetTix thing – if you are a vet you go to the site and fill out the necessary information and you get in to the show for free. It’s just one small thing we can do to show our appreciation. We’ve also donated to various things and gone and visited places to hang out with injured vets. Any small thing that we can do that they will let us – as a heavy metal band – we are all about it. If there’s any more we can do for anyone who might read this – hit us up and we will be all about it.

Dead Rhetoric: With the headlining tours, do you get more choice in terms of picking the bands that you want to go out with?

Asta: For sure. But there’s also the side of it, where if I brought all of my favorite bands, it may change the draw. I may want to bring my favorite band but no one knows who they are. That’s me being selfish and me taking the band that I want. So we have to think about what works for all of us, and what works for the tour. So that’s a huge variable when picking bands. I wish we could always bring our friends from back home – I wish I could bring X, Y, or Z…maybe once, or maybe as an opener. But the package has to be strong. Together we have to draw, just to make it to the next show. It’s more appealing to the promoters as well if you have bands that they know as well.

Dead Rhetoric: As a band, you’ve done a lot of touring – from Mayhem Festival to smaller tours. What do you think has gotten your name out there more? Is it the persistent touring or is it through going and doing larger fests?

Asta: Probably a combination. We always hang out a lot at the shows, and people will come up and say, “Hey I saw you at this show or that show” and it’s always different. The last tour we did with Soilwork, and on this one already, there have been people who said that they saw us at Mayhem, and that was three years ago. It’s interesting to see how many people that has impacted. But it’s always seemed to be that way. We have some really loyal, die-hard fans…some of which have become really good friends over the last few years. So there’s that aspect of them telling their friends.

It’s a combination of touring, being present in social media, and there’s also word of mouth, which I feel is the strongest one. If you tell your friend that you like this band and that you should check them out – that’s the strongest suggestion there is. Everyone is constantly inundated and having things thrown at them on your phone – there’s ads, there’s bands you see constantly – it’s pretty numbing. When someone says, “Check out Imminent Sonic Destruction from Detroit, they are fucking awesome”…and it’s me saying it to you, because maybe we are friends and you trust my opinion, you are more apt to check them out than going on your phone and seeing a bunch of bands being thrown in your face. So that’s a huge part of it. We are not only building our fanbase from the ground up always, but of course, playing the big fests – that’s going to grow the fanbase too.

Dead Rhetoric: With this being the third Winter Warriors tour, is there at least a portion of your fanbase that looks forward to it, as something that you have established?

Asta: I think so. I think it’s something that we look forward to as much as they do. It’s fun to come up with a theme – have the poster and the t-shirt, and come up with a setlist. On this one, we can change it up a little bit more. From my perspective, I like having something annual – it’s cool. One thing we thought of, is that even if we keep doing it, we might not be on it. That could happen down the road. We may put together our own tour and maybe we don’t even play it. Maybe we have something else going on. If there’s a big opportunity that we can’t pass up and we have to do it – we are still going to keep Winter Warriors going and I think that there are fans of this tour that would want to see that. But I’d like to just keep doing it ourselves [headlining].

Dead Rhetoric: So are you trying to establish it as a band festival – such as bands like Sabaton and Epica are doing?

Asta: That would be awesome! We aren’t as big as those bands so it may not be as well-known, but it’s something we’d like to keep going. Keep the vet theme going, the charitable aspect going – the aura around it. Just keep it going – I think it’d be great!

Dead Rhetoric: Rise to Power came out last year – are you about ready to buckle down and write more are you okay with continuing with tours?

Asta: Honestly, I’m kind of on the fence. I’ve always got ideas going on – there’s things I want to do. The second you walk out of the studio you think of another idea. In retrospect too, just listening to the old material – there’s things that I love about our old stuff and there’s things that I want to do with the new stuff that takes it to the next level, and I’d like to do things we haven’t done before. Just play something that I think is fresh and inspiring to me. As far as writing, I would love us to sit down and start writing. However, it depends on the schedule and what we have going on next year.

As it stands right now, we have stuff in the works that is not announced. Hopefully it will be in stone and we can say what’s going on, but if time allows then we will be writing. If not, we will be touring more. The way I look at it, just see how it goes – there’s nothing set that says start January 1st for writing. For the next album, we are going to decompress. We are going to be expressive. We are going to jam together and it’s going to be a good time. That’s what I am looking forward to the most.