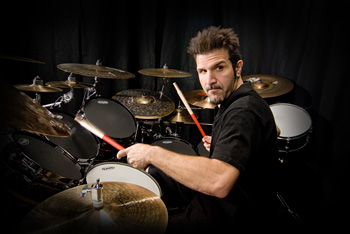 ANTHRAX drummer Charlie Benante has posted a comment on the passing of SLAYER guitarist Jeff Hanneman, who passed away on May 2, 2013. Hanneman suffered from liver failure. He was 49.

Said Benante: “Jeff had a great fucking laugh; I heard it quite a bit throughout the years. The man who wrote such lyrics as ‘feel the knife pierce you intensely’ had a great sense if humor. I will remember him for the music he gave and the intensity he brought our metal world.”

Hanneman had been on hiatus since early 2011, and was replaced on a temporary basis by EXODUS guitarist Gary Holt.