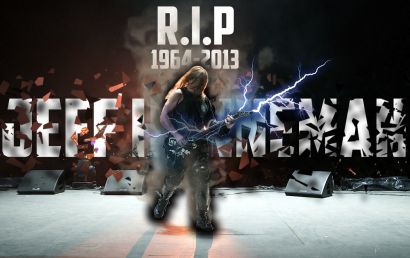 The fifth annual “Revolver Golden Gods” award show was held last night at Club Nokia in Los Angeles, California. During the ceremony, ANTHRAX were joined by ex-PANTERA members Phil Anselmo and Rex Brown for a thrash rendition of the Pantera classic, ‘This Love’, dedicated to late SLAYER guitarist Jeff Hanneman. Video of the performance may be viewed below.

Jeff Hanneman, passed away at about 11AM PST yesterday morning  near his Southern California home. He was 49. Hanneman was in an area hospital when he suffered liver failure. He is survived by his wife Kathy, his sister Kathy and his brothers Michael and Larry, and will be sorely missed.