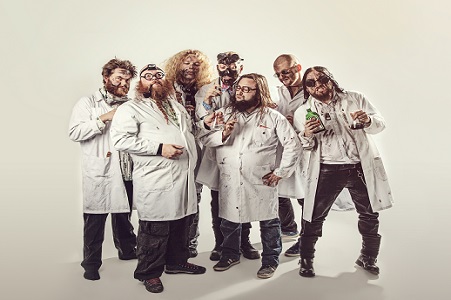 With over ten years of experience in dolling out folk metal that has embraced a sense of fun often lacking in metal acts, the upcoming Kaptein Kaos sees the merry band of Trolls stepping up their game once more.  Utilizing more clean singing as well as an even greater number of worldly influences to draw their folky frenzy, Trollfest is in a game-changing position.  Getting a huge push over here in the States with two high-profile tours last year (Paganfest and Alestorm) under their belt, it seems they are fully prepared to take the reins as one of the folk metal scene’s leaders.

Being so intrigued with the new material and successful changes of Kaptein Kaos, it only seemed right to ask vocalist Trollmannen for some answers to some of our most important questions.  Like how to be a true Balkan, who would win in a rumble between the diverse characters of TrollfesT’s albums, and of course, Britney Spears…grab a beer and enjoy!

Dead Rhetoric: With the celebration of your 10-year anniversary last year (and release of A Decade of Drekkadence), did that spark a notion to change things up for Kaptein Kaos?

Trollmannen: Not that I know of, we actually had the concept and some of the songs before we started our tenth year, and change has been a part of TrollfesT since day one. We have always been experimenting with influences from a wide array of folk, world and metal music but on the other hand, I do think we have nailed what we are trying to do a lot better this time around.

Dead Rhetoric: Going along with A Decade of Drekkadence, you recorded a version of Britney Spear’s “Toxic” for that album.  How did you choose that song, and what led to the creation of that hysterical video?

Trollmannen: We chose that song because it is a very cool piece of music, it suited our style very well and it is a song that people know. The video came about when we found a clip of an old comedy act that had a magical shortening serum they used on stage. We found some people who knew some other people who had connections to those guys with connections and managed to buy ourselves enough serum for one video. It was a bitch to operate the camera when so short, but an otherwise hysterical weekend

Dead Rhetoric: TrollfesT saw a nice surge in popularity over here in the States after the Paganfest tour last year (and subsequent return with Alestorm at the end of the year).  Was there any increased pressure to deliver the goods with Kaptein Kaos?

Trollmannen: Not so much pressure but rather a little bit of nerves I think; large parts of it [Kaptein Kaos] were already finished when we came to the States. We were and still are mostly nervous about how the new stuff will go over and if people will like it as much as we do.

Dead Rhetoric: With Kaptein Kaos being your most diverse record to date, was there ever a thought that maybe you veered off too far, or do you think that fans more or less expect some left-of-center action from you guys?

Trollmannen: I think and hope that our fans will not only expect but also welcome left, right, above and below of center action from us. If you create something new and it is awesome, it is wonderful. It has the downside of slowly becoming not new anymore though and just as a joke told too many times, new music also loses some of its punch. Especially so if it is just one small idea being repackaged, renamed and resold over and over again. We don’t want to end up beating that dead horse.

Dead Rhetoric: “Seduction Suite No. 21” and “Solskinnsmedisin” seem to be the most immediate examples that come to mind of the incorporation of more “world” music on Kaptein Kaos.  Are there any other types of music you’d like to tackle with a TrollfesT perspective, given the opportunity?

Trollmannen: Absolutely, but I am not going to give any away here because I have the opportunity and will be using it on the next TrollfesT record.

Dead Rhetoric: With the TrollfesT knack for characters throughout your albums, what made you decide upon the time-traveling Kaptein Kaos for your newest album?

Trollmannen: We wanted to make a concept album with a lyrical theme going throughout the album, but we also wanted to have very diverse music with many different influences. In order to make the lyrical themes fit the musical themes at all the diverse and different times the idea came up to have the troll travel through time so he could be where the music took him so to speak. Also we found the idea of a time traveling troll being responsible for some of the biggest catastrophes that have happened on earth very entertaining.

Dead Rhetoric: “Ave Maria” has been released and there has been a nice explanation of the Kaptein’s exploits within the track.  What other adventures can everyone expect within the songs once Kaptein Kaos is released?

Trollmannen: Well, like any good scientist would, he starts of going back in time to before the big bang to see what really happened, but all he can find is a big fuse (that would be the one on the cover) so he lights it and goes forward in time to taste some primordial soup. He also has a misfortunate run in with the dinosaurs, the Roman Empire, Asian dynasties and the people who used to live next to the volcano Vesuvius (I think the city was called Pompeii).

Dead Rhetoric: Jonas Darnell again did the artwork for Kaptein Kaos.  Have you thought of putting these crazy characters that you have created in some sort of a battle royale to see who would come out on top?  Any guesses as to who might win?

Trollmannen: That is an interesting idea I had not considered yet. Der Jegermeister is the hunting and weapons expert in the village so he is a possible winner, Grubblegjøken on the other hand has ancient wisdom and intellect on his side and if allied with the cunning abilities of Karve would make a formidable team. Brumlebassen would not stand a chance and Brakebein would be too drunk to care. The hellhound Garm is crazy enough to pull it of but the most likely winner is actually Kaptein Kaos because he could go back in time and beat all the others when they were kids. Even though that would be a proper asshole move he would probably do it if it came down to that.

Dead Rhetoric: Fun is unfortunately not a word that we get to use often in describing metal.  With the amount of seriousness in the metal world, how do you straddle the line to ensure that people take the music seriously while keeping it light?

Trollmannen: We take the musical side of our output very seriously and spend a lot of time tweaking it to be just right and experimenting with it to see if we can make it even better. I like to think that all that time and effort we have put into it shines through in the music when you listen to it. Also we made up a fictional language to disguise our silly lyrics but (unfortunately?) you can’t present your music to people without talking at length about the lyrical content that comes along with it, it seems.

Dead Rhetoric: The TrollfesT tag of “True Norwegian Balkan Metal” is meant to be a riff off of black metal.  How does a member of Trollfest go about their day to ensure that they are being “true”?  Is there alcohol involved?

Trollmannen: No, we go about our days like normal people: wake up, have a bowl of vodka and cornflakes, stand at attention and speak the oath of truth “We are so true, I tell you its true x5,” then we go out for a beer jog which is just like a beer jug only bigger before we have the universal “Five pints of wine makes the day so fine” competition. After the winner has been declared we start the usual whiskey and cigar marathon which usually runs until we go for our nightly liver transplant procedure. It’s as true as can be.

Dead Rhetoric: The band spends quite a bit of time with Spotify, how did the TrollfesT DJ at your party idea come up?

Trollmannen: The idea was to share some of the music we love outside of TrollfesT. We also have personal playlists of our individual favorite music on our Spotify page and it’s all about spreading the love for music.

Dead Rhetoric: A Paganfest highlight last year was seeing TrollfesT dressed up like bees.  Do you have any fun costumes planned yet for your Kaptein Kaos touring?

Trollmannen: Indeed there will be new costumes and possibly homemade special effects for the Kaptein Kaos gigs.

Dead Rhetoric: What’s next for TrollfesT once Kaptein Kaos is released?

Trollmannen: Playing as many shows as we can, have as much fun as we can and slowly start planning the next release.