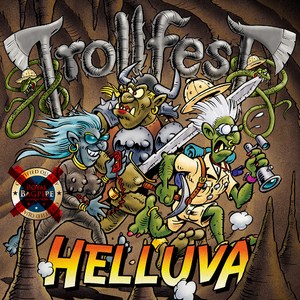 When it comes to the absurd, not too many can pull it off with more finesse than that of Trollfest. The antics, the goofiness, and the sometimes off-kilter compositions, Trollfest sits slightly above their peers in the lighter end of the folk spectrum due to their willingness to avoid restraint. This time around, the band centers the album on an adventure to the center of the Earth, complete with spelunking, and you guessed it…trolls.

As it could be expected, you’ll find a number of things that will come out from nowhere. One of the most delightful is that of the assaulting “Hen of Hades,” in which horns and folk instruments assault the listener amid blastbeats and some chicken sounds. “Trollachen” is a strange little piece, full of laughing (sounding almost akin to a bar sing-a-long at times) and goofy synths. “Steel Sarah” comes out of the starting line with an 80s/Nintendo synth to it before the brass takes over for one of the album’s strongest choruses. Elsewhere, the high-energy “Professor Otto” and “La Grande Finale” are sure to incite some live dancing and silliness with their heavier approach done in the way that Trollfest delivers best. Some of the mid-tempo tracks like “Kabaret” and “Reiten mit ein Fisch” offer some interesting use of the brass section in some catchy melodies, though “Gigantic Cave” will be the one you’ll be most likely to remember with its impressive and hard to get out of your head chorus. Obviously there’s much to discuss over the course of the album, and the tracks have no trouble differentiating themselves.

Though one may know to expect the unexpected and ridiculous when it comes to Trollfest, they’ve no doubt made one hell of an album (had to get at least one pun in before the end). Trollfest continue to walk their own path, and if you grasp what the band is trying to do, Helluva is sure to win you over with ease.