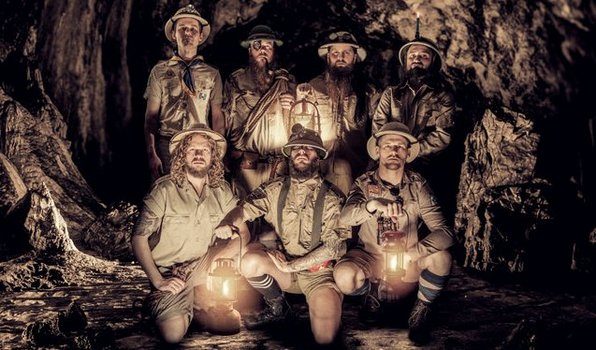 When it comes to folk metal, few handle the quirky and often goofy nature of the material better than Trollfest. Not to mention taking it to a whole new level! No one doubts the musical genius (and occasional insanity) that the band often displays in composition, and rather than play it straight the band has always chosen to go as off the wall as possible. Slowly building up both name and reputation, both in studio as well as the live stage, Trollfest have most recently released their seventh album, Helluva.

Carrying on fine Trollfest traditions (such as the use of their own “troll” language and an overarching concept), Helluva still packs an inventive punch. Brass and outside instrumentation carry a larger presence, and the band’s ability to insert different styles/genres into their own is always a treat to behold. Plus, how many bands have taken to writing a song about a demonic chicken? Guitarist Mr. Seidel took a few minutes to catch us up on the band’s return to 70,000 Tons of Metal, using a troll language, and what it takes to make a helluva album.

Dead Rhetoric: You made a return trip to the 70000 Tons of Metal festival this year – any lasting memories this time around?

Mr. Seidel: Every second on the 70000 Tons of Metal is a lasting memory! It’s by far the coolest festival we have ever had the privilege to attend. The boat, the bands, the fans, the crew, the weather, the food, the alcohol, Miami, the Caribbean, and the list goes on. I think we also had our wildest concerts to date on the cruise. People went bananas from the first song to the last, indulging in crowd surfing, wall of death, and never-ending conga lines.

Dead Rhetoric: With Kaptein Kaos and now Helluva being conceptual, do you think the band has found its calling this type of storytelling approach?

Mr. Seidel: We feel it gives our albums something extra when we can include a concept story. We tend to bring imagery from the stories with us on stage in form of costumes and props. This also seems to be something that our fans like as we see them discuss what will be the next “theme” and “costumes” before we release new albums. I think we will continue with concept stories in some form or another on future albums as we still have a lot of stories to tell.

Dead Rhetoric: Was there anything you wanted to really accomplish with Helluva that you had not been able to do with previous releases?

Mr. Seidel: World domination and millions upon millions of dollars in our bank accounts was the ultimate goal with Helluva, but unfortunately it did not turn out this way this time around either. Hopefully on the next album… We never give up hope!

Dead Rhetoric: You’ve put out a large number of humorous videos to accompany the new album, do you feel the visual aspect adds an extra element to the songs themselves?

Mr. Seidel: Not only does it add an extra element to the songs it’s also a great way of promoting the new album. YouTube and music videos seems to be the new way of promoting music. True Norwegian Balkan Metal has not been embraced by the radio and in order to be published on huge playlists on Spotify and other big digital platforms you really need a lot of money (or have to lick somebody’s ass). So, we decided with Helluva to take the promotion more into our own hands and just film, film, film and film some more and get as many videos out there as possible. If it’s a success only time will tell. At least we have a lot of fun doing it and it keeps our creative minds busy!

Dead Rhetoric: One of the videos is an animation that you created. Can we expect more animations in the band’s future?

Mr. Seidel: We have always wanted an animation video for our music, but once again, it costs way too much for us. So, we decided to once again take matter into our own hands. I got the appropriate software for animation and just sat down and started learning everything from scratch. It took me 2 months from start to finish to make the “Fräulein Helluva” music video, but it definitely sparked a hunger for making more animation videos. So, to answer your question, yes there will be more animation videos in the future! I just need to find the time to make them in between regular work, creating music, practice, live shows and normal life…

Dead Rhetoric: With all of the creative cast of characters that the band employs from album to album, do you feel that there’s anything that you couldn’t tackle with the scope of Trollfest?

Mr. Seidel: In TrollfesT we are only limited by our minds. Up until now we have done everything and anything we have wanted to do, and it’s extremely liberating. We do not have any set borders that we need to keep in mind when we make music or lyrics. Usually we brainstorm together and the most wacky ideas are the ones ending up on our albums.

Dead Rhetoric: What inspired the “Hen of Hades?”

Mr. Seidel: The idea of Hen of Hades came along when we took the taxi from the hotel to the 70000 tons of Metal in 2015. Vast amounts of beers and being super excited for the cruise made our minds go nuts, so we started talking about what kind of pet the devil would have and so the idea of Hen of Hades was born. It took another year before the song was started, and what sparked me to start making the riffs was a sample of a hen clucking I found in my studio software. I heard the sample and instantly remembered our conversations of the Hen of Hades a year earlier.

Dead Rhetoric: Does having a unique Troll-language ever cause problems from a lyrical standpoint?

Mr. Seidel: For us it has never caused any lyrical problems, on the contrary it has enriched our vocabulary and helped us express our feelings more sincerely. Trollmannen is a very emotional guy and is not able to express his inner voice in just one language. He needs at least three. This is something that has followed him since elementary school. There is even a documentary about Trollmannen made by Norwegian TV from when he was young and how he changed the way teachers look upon gifted children and the way they express themselves. The documentary is to be found on YouTube or www.NRK.no and it’s called “Fantastiske barn er rett og slett fantastiske”; roughly translated it is something like: “Fantastic Children and Where to Find Them”.

Dead Rhetoric: Are you getting sick of all of the ‘Helluva’ puns in association with the album by now or were you hoping for that type of a response?

Mr. Seidel: Helluva puns? I don’t understand what you mean by Helluva puns? As for the response of the album we are super happy because we feel this is one hell of a good album. We also have one hell of an amazing fanbase and it seems like they all enjoy this hell of a crazy album. 2017 is looking to be one hell of a busy year for us too, so I guess we did something helluva correct on Helluva.

Dead Rhetoric: What inspired the Trollfest ‘Drinking Game from Hell’ that you were selling on tour?

Mr. Seidel: The TrollfesT “Drinking Game from Hell” Edition is based upon the original “Drinking Game From Hell”. The original game was made by a good friend of ours, and also an amazing tattoo artist, from Oslo called Bjørn. The TrollfesT Edition of the game was sold out in the blink of an eye, but you can now get the original game from Nuclear Blast Europe (http://bit.ly/2nRCare) and it is a game highly recommended by us. Also, a very dangerous drinking game because we all black out before we even manage to finish the damn thing.

Dead Rhetoric: Between the visuals/costumes and music itself, do you feel that Trollfest is best taken in from a live performance?

Mr. Seidel: Yes, I think TrollfesT is best taken in from a live performance. Performing on stage is what we love to do. Don’t get me wrong, we also love to record and all that, but being on stage is where we prefer to be. We love to interact with the audience and just have as much fun as humanly possible. So, I think with everything going on onstage together with the music you get a real glimpse into the world of TrollfesT. Crazy, fun, unpredictable and just share madness!

Dead Rhetoric: Do you have any touring plans now that the album is out there and available for consumption?

Mr. Seidel: We are working on tours for 2017 and 2018. As for now we have a mini tour lined up in Norway in May and we keep getting more and more festivals ready for the summer. Hopefully we will be able to announce a tour for the last part of 2017, but this is still under planning.