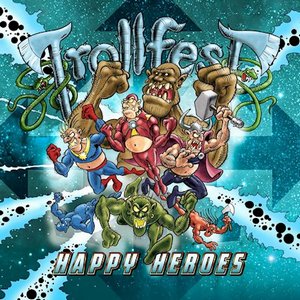 Life got you feeling the blues? Let the perpetually fun fellows in Trollfest give you a few reasons to turn that frown upside down. The band’s latest EP may be somewhat on the sort side, with just one new original track and three cover songs, but don’t fret – it’s entirely full of reasons to make fans (and even some new ones) smile with probably a bit of drunken glee.

The whole concept of the EP is ‘happiness,’ and that starts off with the jovial sounding new title track “Happy Heroes.” With just the right amount of toe-tapping tavern vibes and adventurous folk metal in its veins, there’s plenty of fun to be had with this one. A driving chorus and some humorous lyrics about some troll ‘superheroes’ hits it all home with that signature upbeat Trollfest style. The three cover songs are that of pop hits, an area where Trollfest is quite solid in twisting them to make them their own, such as their previous cover of Britney Spears’ “Toxic.” First up is Aqua’s “Cartoon Heroes,” which has guest vocals from Miriam Renvåg Müller handling the female lines. The punkish vibes and Trollmannen’s howls make the track significantly heavier than its original, but still carries a bouncy undertone that makes it entirely recognizable. Bobby McFerrin’s “Don’t Worry Be Happy” is next up, and it starts off with some reggae vibes before exploding into blastbeat-riddled heaviness. It’s the very stark contrasts that make it a really playful track as the chorus accelerates dramatically, while still keeping some of those reggae feelings below the surface. Last up is Pharrell Williams’ “Happy,” which doubles down on some more punk-infused riffing and energy and folk swing, along with a groovy breakdown later in the track, and is just as infectious as you’d expect it to be.

Happy Heroes is just the quick pick-me-up if you want a break from the downtrodden nature of the current landscape. Trollfest are champs when it comes to making fantastic and fun covers, and the original track is the cherry on top. A great combination of completely silly vibes and excellent songwriting.