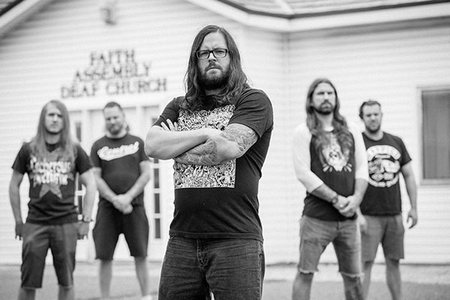 In 2003, The Black Dahlia Murder came (mostly) out of nowhere to release their debut Unhallowed. Thirteen years later, they have become one of the biggest and revered bands of the death metal scene. It hasn’t been an easy road though. The band’s workhorse mentality and hopping from tour to tour to tour has allowed them to continue to find new fans as the years progressed, building their success from the ground up. The band’s latest release, Abysmal, continues to see the band refining the sound that originated from Unhallowed and taking it in new directions.

Then guitarist Ryan Knight announced his departure from the band earlier this year. From this motion, The Black Dahlia Murder decided, in order to “soften the blow,” it would be nice to revisit their roots with Unhallowed. Taking the small club route, the band has now set out on a string of dates to play the long-admired debut from start to finish (along with some new cuts as well). DR was able to catch up with vocalist Trevor Strnad at the Poughkeepsie date of the tour to discuss this very hyped event. Strnad’s genuine love for the metal scene easily comes across over the interview, in which we discuss the road from Unhallowed, the virtues of Bandcamp, and his column at Metal Injection.

Dead Rhetoric: Considering what you are doing with this tour with Unhallowed, how do you feel the band has changed since that point, up to now with Abysmal?

Trevor Strnad: A real lot has happened in my eyes. I think we become a real band at that time. When we cut that record, we were very young. We hadn’t even left the state at that point. We didn’t have much touring under our belts, or very many pro shows even. I feel like when I hear the album I like the ideas, I like the songs, but I don’t feel like we had the chops to execute them like we do now. I think we have really grown as players, and the guys we have now are incredible. It’s cool to hear the songs fleshed out to their full potential. It’s exciting. It’s very nostalgic for me, and I’m sure for Brian [Eschbach] too, being the other original member and having also been there.

We are revisiting a lot of places we haven’t been in a long time. I was under the impression that we were playing upstairs here [The Loft – Poughkeepsie, NY], which we did a lot in the early days. I guess we are playing downstairs [The Chance], which we have done too. We did a lot of time playing upfront, when it was Crannell St, and we did some up in The Loft that were pretty crazy – I was just dreading the stairs! I was pretty glad to see we were playing downstairs today [laughs]. It’s cool – it’s nostalgic for me to be here even. We came out here a lot in the early days, and also the schedule, being a two-month long thing, is pretty brutal for us. We haven’t done it like that in a long time. Back in the day, it used to be three tours butt-to-butt. You’d get off one tour, drive to a different tour and start up another with someone else. That’s how we used to do things. It’s a marathon, but it’s going to be cool too. There’s been good vibes – people are real excited to hear Unhallowed, and it’s been fun so far.

Dead Rhetoric: Is there a track that people have been shouting at you for years that you might be able to silence?

Strnad: There’s a few I think! “Apex,” the last song, people have been asking for it for a long time. “When the Last Grave Has Emptied” – the zombie song. “The Blackest Incarnation” – the werewolf song. That’s just how I think about stuff – I think about writing a short story, where it has one theme. You get in and out in three minutes, and hopefully tell a story. It’s funny to sing some of the lyrics once again. I just remember how excited I was when I wrote them, and how excited I was when we got signed to Metal Blade, and that transition – or imagining what it would be like to transition from going to school to touring full-time.

We basically just took off then, when we got signed we started touring and I think that was part of why they wanted to sign us – we said, “Hey man, all we need is the means to do it; give us a vehicle and we will go.” And that’s pretty much what they helped us do. Metal Blade has always been killer for us. They have always been behind us, and I see a lot of our peers and other bands that have had to change labels a lot in their career. I can’t imagine having that tumultuous situation. We have always had a strong backing for the band and I think that has been instrumental for sure.

Dead Rhetoric: You mentioned going back to singing some of these old songs, how do you feel your writing has changed?

Strnad: I try to make it clearer; easier to understand. As far as patterns and stuff, I try to slow down a litte bit. Singing in a slower pace compared to what I would have done in the older days, in an effort to make things clearer and more understandable for the listener. There is never going to be a point where we are clean singing or anything like that, but I have been trying to make things more catchy in my own way. Having things be more tuneful – a bit more note-y on some of the new stuff. I remember being in the studio for Unhallowed, and the very first times being in the studio being very overwhelming and anxiety-ridden. It was a new experience. By now, we have done it so many times – I enjoy the studio. I enjoy creating music and seeing it come to life, putting albums together.

It just goes back to that question of what has changed since then. We have become a much smarter band through trial and error, and touring so much. I like to think that we have gotten wiser in a lot of aspects – not just playing music. We have learned a lot out here [on the road]. We have been out here almost constantly since we started. The longest break we took was to write Abysmal. We took some time at home to decompress from tour. That was six months – that’s the longest amount of time we have ever had off. We have been hitting it hard since 2003 since we signed, which we promised to do in our letter to Metal Blade – “Give us a chance and we’ll tour our asses off man! C’mon let’s do it!” I guess they saw that we were genuine. It’s been fun – this really takes me back, talking about Unhallowed.

Dead Rhetoric: That drive that the band has had, do you think it has laid at least some of the groundwork for why you have been so successful?

Strnad: I think that’s the main thing. In a world where you play the kind of music that is not on the radio, it’s all about word of mouth and being ever-present. We are trying to always be on tour and be highly visible. I feel like people have started taking music for granted more. It’s come more with the Internet era – a lot of people steal music – I’m not going to go harping down that road. It’s made music more disposable though. Attention spans are even shorter than ever, so we realized that. We try to keep the records coming and stay on tour all the time. We try to be in people’s consciousness and always have something going on. That has really been a big part of it. Early on, we used to have to hit it so hard. We would be out 10 weeks straight doing 3 different tours in the US that all connected. Now we can afford to take a little more time at home. There’s anticipation to see the band, which is awesome. It’s amazing. It’s definitely changed in that regard. We have slowed our schedule down to a more reasonable pace, but we still do a lot of shit. This tour is definitely an example of that.

Dead Rhetoric: In regards to this tour, how much of a say did you have in terms of the two support bands: Fallujah and Disentomb?

Strnad: They are directly chosen by us. Fallujah I love, and I think they are awesome. I think they are really on to a unique path in extreme metal. It’s very progressive and very cool. They have a new album dropping during this tour, which is cool – that’s big for them. It’s also good for us to have a big band that attracts people. That’s the kind of thing you have to think about when you are bringing bands on. Disentomb is another band that I love. I have a huge soft spot for brutal death metal. Everything that sounds like [does brutal death growl]. I love everything like that, so it’s really cool to have a band like that. It’s sort of like a micro-genre of death metal, if you know what I mean. They have to be one of the biggest bands in the States, as far as brutal music goes. They have been doing very well, and they have been around the States a few times already. They are just insane. It’s very cool to have the two of them and we knew that was a totally winning combo and it would help us sell the clubs out – have anyone looking good.

Dead Rhetoric: I wouldn’t imagine it would take too much effort to sell out some of the smaller sized venues you are playing on this tour…

Strnad: Yeah, they vary a bit but generally, I am hoping we can sell most of them out. We thrive in a smaller venue. The wilder the show is allowed to be, the more fun we can have. Stage-diving I love, crowdsurfing; that close interaction where fans can sing into the mic because there’s no big barrier. I guess you would say, like a hardcore show. That kind of setting is where I think we are the best. For us, it’s like home court to go play smaller venues, and bringing these bands – just knowing that they are going to sell out and people are going to be turned away, it’s creating excitement.

The Unhallowed tour was also meant to be a way of softening the blow of Ryan Knight leaving the band recently. We thought it would be a good balance, as we are bringing in a new guy – but to bring things full circle. Be playing Unhallowed and give them something to be super-stoked about. It seems to be working so far – it’s been a smooth transition. We have Brandon Ellis playing with us, from Arsis and Cannabis Corpse, and it looks like he will be full time. We are just hanging it over his head to haze him for a while. He’s an amazing player. He’s 22…I’ve never been that good at anything. Seriously, not masturbation, not farting, or anything that I excel at [laughs]. He’s just a freak – he’s a virtuoso. He’s doing a great job of filling Ryan’s shoes, right out of the gate he is an explosive player and fun to watch on stage. It’s been cool.