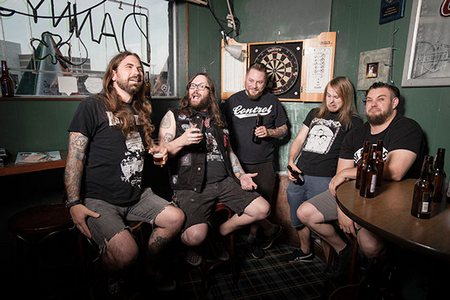 Dead Rhetoric: Has he been adding any of his touch to any of the material?

Strnad: Definitely to the old stuff. The solos were really stiff on the old recording. There’s a bit more vibrato and more attitude – he puts his own swagger on things. I consider Unhallowed to be in the infancy of the band, so the structuring of the solos have become vastly more complicated with time. He’s the best of both worlds. He’ll dress it up a bit, but it’s still the same solos that people expect.

Dead Rhetoric: Looking at some other interviews you have done, I get the impression that you view The Black Dahlia Murder as sort of a gateway band into even heavier music, like the brutal death metal you love. Would you agree with that?

Strnad: Yeah, I don’t think we ever meant to be that, or I don’t think about it in terms of writing music that will be appealing to someone as their first metal band. It just happened that way I guess. I think it’s the product of us being called so many different genres by people. It has helped us get enough people to fill the room. By being considered all of these things – there’s a constant fight online as to what genre we are. To us, it’s always been just death metal. But I also see that if we had only been called death metal from minute one, it may have put a glass ceiling on things for us. When I look out on the crowd, I see all sorts of people that like the underground: punk rock kids, hardcore kids, metal kids, older metalheads, long-haired types, all kinds. It’s cool man! I don’t care what they call us either. I realized just to be thankful. Why look a gift horse in the mouth? If we are here, we get to play. Who cares what people call us?

Getting back to the question, it’s just something we have realized with time. We’ve gotten a lot of kids into the extreme, and it’s just been that we have been able to do high profile tours and stuff. We have been able to go beyond just touring with death metal bands. That is my comfort zone, or my preferred road, but we have seen the merits of touring with hardcore/metalcore/deathcore and everything in between. Realizing who likes us and trying to appeal to every walk, instead of painting the band into a corner. We have seen tons of young people getting into the band. Videos are just stuck to YouTube now, but back then I think videos used to help us get out. We were in magazines alongside more accessible stuff, like Killswitch Engage and As I Lay Dying. They weren’t entire worlds away from what we did – it still makes sense to play a show with bands like that as far as I can see. At that time, we were definitely lumped in with metalcore and we got in a lot of magazines and tours with those types of bands. That whole thing cooled down a lot, and deathcore kind of took over. With those breakdowns, I think young people just sort of gravitated to that. Deathcore was taking a lot of the extreme elements from death metal – kids liked the big scary logos, the violent lyrics, guttural vocals, some kind of blast beats – that was another thing that kind of helped a lot of kids into our band since we got lumped in with that when it was the big thing. I’m just thankful for how it has all played out.

Dead Rhetoric: I know you do a column every month for Metal Injection and spend a lot of time looking at albums on Bandcamp. When you are looking at music on Bandcamp, what gets you to say, “Oh, I want to check this out?”

Strnad: I think artwork is one thing, still. It still has that curb-appeal for all music. If something can look in a way that you expect it to, but also cool…I want to see a sick-ass death metal cover. It’s not required, but that will pique my interest first. Hopefully, you will have the whole package. You can’t always afford it, and I understand that. Bands that are on Bandcamp, for the most part, don’t have labels. That is their label – that’s the best part about it. It’s a storefront and mini-label all in one. I love how you can sell physical copies through it, but grant the person that bought it an instant download in whatever quality they want. That does it every time for me. “10 bucks for a CD…and I get to hear it now, in FLAC. We are doing it.” I think it’s the best of both worlds, and I think it’s smart to see the labels getting with it and getting their bands on there. Definitely for small, independent death metal labels, it’s a huge tool and something they should get on top of for sure.

But it definitely starts with the artwork. I’ll check the charts and see what people are liking too. I definitely look everywhere – I don’t confine myself to Bandcamp, but it’s definitely cool and I love it. Pretty much following a zillion labels in some form on social media. Just being aware of the labels that are out there, world-wide, is definitely helpful in broadening your horizons to things. It also made me realized how interconnected the whole scene is. Mail-wise, Internet-wise – that’s brutal death metal. It’s a small scene brought together by the Internet for the most part. That’s the radio for death metal.

I still buy tons of records, and I love to do the column. I was already buying this shit anyway, so it was cool for me to do something positive with my neurotic vice – collecting death metal and digging for new music/bands. It’s been really fun. It’s been fun to make the bands happy – see them stoked and say “more people got into the band and bought the record, and we think it’s because of you.” That’s the coolest feeling ever. I saw a huge hole in metal media for the stuff I actually like. It seems to be driven by the bigger labels, and so much great stuff was slipping through the cracks. Brutal death metal in particular has had a deaf ear turned to it as far as metal media goes. I just thought, why not? It turns out, it’s getting big! It’s exciting for me. I was talking to Rob the other day, and the last one we did got like 10,000 hits in two days. Just thinking about a brutal band just getting in that many people’s ears if they click the links – that’s exactly what I meant and hoped to do. It’s rad and I enjoy it a lot.

Dead Rhetoric: So to end things, what do you have planned for the rest of the year after this tour?

Strnad: We have a little bit of a romp in Europe, bouncing around from festival to festival and a few club shows in between there in the latter half of the summer. We have some big ones there that will be pretty cool. We are talking about hitting a couple festivals in South America and maybe a couple shows surrounding that. After that, we are still just getting everything together. Just solid touring for the next year and a half probably. I think we will be doing this Unhallowed thing over in Europe too. Probably in those festivals since there has been a lot of response. We’ll still be playing a lot of Abysmal stuff. It’s important to be pumping Abysmal, that’s the real objective here.

We’ll be back out doing our thing; getting around. We’ll try to get over to Asia and hopefully back to Australia…everywhere! We have really been thinking globally for the last 5-6 years or so and really getting around. It seems like every album affords us the opportunity to go to new places and conquer new territories. Last time it was China, and that was really cool. Point the compass and we will go.