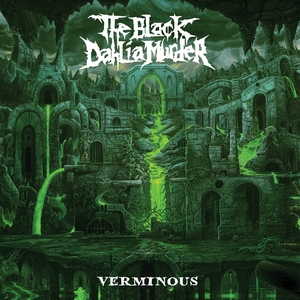 At this point in the game, there’s not many in the extreme metal community that don’t already have a solid sense of what The Black Dahlia Murder are all about. One could say that they really established their guidelines quite some time ago (perhaps back with Nocturnal), but that hasn’t caused them to simply roll over and churn out the same release, time and time again. Much like previous release, Nightbringers, Verminous has an urgent, hungry vibe while showcasing the subtle maturity of a veteran act.

A good chunk of what has made The Black Dahlia Murder work over the years is their sheer dedication to high-velocity songwriting. It’s an adrenaline rush. But the case could also be made that as they’ve released more albums, they’ve gotten much better about understanding the nuance behind it, as well as the need to diversify. Nightbringers really pulled in the melodies, and Verminous seems to attempt one-upping it in the best possible ways. Recently released single “Child of Night” has no problems slowing things down and tossing in some absolutely killer melodies, not to mention the emphasis on even stronger lead/solo work since Brandon Ellis’ entrance to the band.

There’s a noticeable amount of groove on the record too, with “Sunless Empire” happily chugging along in such a way that it’s hard not to bob your head along with it. “Removal of the Oaken Stake” switches gears repeatedly between groovy yet galloping riffs, melodic indulgences, and meloblack speed runs. Even vocalist Trevor Strnad joins in with diversifying the landscape, with the hardcore/punk-ish tinge to the chorus of “The Wereworm’s Feast” being a real highlight (along with the track’s massively heavy ending). And for those seeking a majestically heavy ending, “Dawn of Rats” absolutely delivers in that classic TBDM way: throttling blastbeats with blackened melodies, but also weaving in some really impactful slowdowns that elevate it even further.

While you can hear those gritty first notes and instantly identify it as The Black Dahlia Murder, it’s important to note the continued focus on dedicating to what makes each song, and ultimately the whole album, work. There’s a strong sense of flow here, that’s augmented by the band injecting in more melodic and groovy territory in addition to the staple brutality and speed. As such, Verminous stands neck and neck with the impressive Nightbringers as some of the band’s greatest works in recent years.