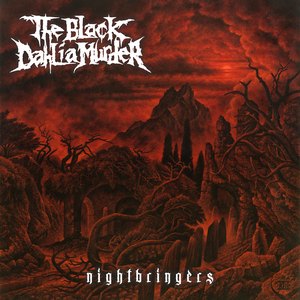 The Black Dahlia have been serving up some very consistently high quality death metal releases ever since Ritual came about. Not to demote their earlier material (particularly Unhallowed), but the sound really seemed to click right around that time, and they’ve been attempting to one-up each previous album since. In that regard alone, consider Nightbringers to be a definitive winner.

Compared to their last album, Abysmal, Nightbringers feels a bit more focused on melody. Abysmal had some blistering velocity going for it in many tracks, and while Nightbringers is never at a loss for speed, it just seems more playful in regard to melody. Perhaps some of it is the influence of new guitarist Brandon Ellis (Arsis, Cannabis Corpse), but the bouncy NWOBHM-esque riffing of the title track or the fists-to-the-sky melodies of “Kings of the Nightworld” are more than enough reason to put a grin on most fans faces – yet never feels out of touch with what the band has done before. Most particularly striking is the epic closer “The Lonely Deceased.” TBDM usually produce some strong finales, but this one does an exceptional job at tying everything up. Some fantastic shredding in the solo department, glorious sounding visceral melodies, and even a short acoustic break all weave together and really push you to listen to the entire album one more time. Being a sleek 33-minutes, there’s even more reason to go back to the start – this album is really stripped down to the essentials in the best way possible. Some other highlights include the well-executed gang vocals in “Kings of the Nightworld,” the slow beginning that builds to a get-up-and-go melody in “Widowmaker,” and high-octane riffing that defines “Jars.” Overall, it just seems like each song within Nightbringers brings some interesting ideas to the table to set it apart – even more so than on previous albums.

The Black Dahlia Murder have stepped it up once more and have crafted their strongest album in recent memory. The typical, high-velocity riff fest is still very much here but a more focused effort with the melodic side seems to have strengthened their sound. It’s a combination that’s not only hard to beat, but also raises the bar yet again.