Napalm Death – Time, What is Time? 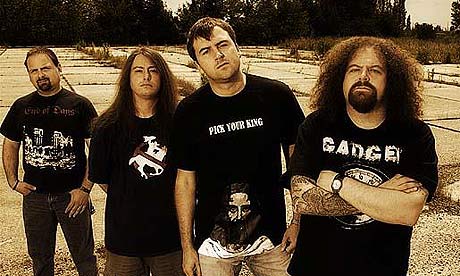 Venerable, venerable Napalm Death. This scribe picked up on the band during it’s mid-90’s era when albums like 1994’s Fear, Emptiness, Despair and 1997’s Inside the Torn Apartprovided a more swirling, death metal laden approach that eschewed a vast portion of Napalm’s early grindcore tendencies. Through that particular decade (which saw singer Mark “Barney” Greenway” depart for a short period in ‘96/’97), Napalm weathered the massive downturn that affected practically every death metal band – grindcore, straight brutal or not – allowing the four-piece (rounded out by bassist Shane Embury, guitarist Mitch Harris, and drummer Danny Herrera) to move into the 00’s with renewed vigor and focus.

The band’s trials and tribulations against former label Earache Records are long and storied, as are Greenway’s legendary assaults against the status quo, big-wig corporations, animal abuse, and anything else that could piss a punter off. Greenway’s lyrics are every bit as vital to Napalm’s sound as the controlled chaos contained within. Fresh off the one-two wallop of 2005’s The Code Is Red… Long Live the Code and 2006’s Smear Campaign, Napalm return withTime Waits For No Slave, perhaps it’s most devastating collection of songs since 2000’s Enemy of the Music Business.

At the ungodly hour of 6:00 AM EST, Greenway phoned to discuss the new album, his business approach, and we were this close to finding out how we can repair the economy, Napalm-style. Oh well, we’ll just settle for a visual of Greenway heckling the fuck out of some crooked suit…

Blistering.com: You had a run for a while where you cranking out albums in a short period of time. Why the three-year wait for Time Waits For No Slave?

Barney Greenway: Just because Napalm in general, is not much of a calculated band. We tend to do stuff quite spontaneously and that’s the beauty of Napalm Death. Things just happen; there’s never a masterplan. AfterCode, we felt we have the impetus, the creativity, so we felt we could do it. Because Code and Smear were so well-received, other things were taking our time… and it came to a point where we said, “Yeah, we should do another album.” We always put ourselves against the clock, so it was a month before we were supposed to record and we went in, so there we go.

Blistering.com: Does most of the songwriting spark come from Shane nowadays?

Greenway: I think Shane is a very creative person, but everyone in the band has their own perspectives. He’s very productive – he’s in a different band every other week [laughs]. I’ve always been impressed by his desire, whether we’re getting toward the end with an album and he comes up with stuff to pique my interest, whereas with someone else who comes up with something, you’ll be [in a tentative tone] “Well yes, that might be good, uh, ok.” [laughs]. Shane constantly piques my interests, gets the old juices flowing.

Blistering.com: You had some lineup issues with Napalm’s direction in the mid-90’s, but now it seems the band is on one page.

Greenway: It’s a combination of a lot of things. If you look outside of the band, a lot of it also has to do with having a decent support structure, which we haven’t always had. I’ve always been one to criticize record labels or whoever else when it’s warranted, but Century Media have been fantastic. When you got that and you’re confident you don’t have to look over you shoulder for the record label to do something that’s going to set you back six or seven albums, it’s going to free you up creatively. It’s all sunk into place sinceEnemy, really. In the mid to late 90’s, there were some directions that caused a dive in the band itself. Looking back, there were some things that were really good. I’ve been told that we’re really influential on some things like this whole “math metal” scene, so we’re meant to believe those albums [in the mid-90’s] had a quite an influence on that. Different years, different vibes, different situations.

Blistering.com: You had a long and brutal fight while you were on Earache. Are you going to be bummed when record labels do die off? Better yet, can Napalm survive without a record label?

Greenway: As much as Century Media has been great, it would ideal for us to be in-house. But, that said, I don’t want to kid myself. It would be a fairly tall order with all the touring and recording we do. Stuff behind the scenes that Shane and I take care that props up the band – the stuff that people don’t see. I already don’t have enough hours in the day to have to handle all of it. None of us could do it. I think the general move is toward self-sufficiency, to see that happening, I think in a lot of ways with the major labels is getting a bit of payback. For years, that sat greedy at the top of the heap. They were always very willing to exploit bands both of our level and the general public. Now they’re getting a taste of their own medicine. There will be a need for labels as long they’ve become more supportive of bands. I’m talking about situations where a label will sign a band, promise them the world, the honeymoon period for a couple of months, then drop them like a stone and absolutely not give a shit. The band is ruined and potentially ruined some people’s lives in the process. There will be some room for them if they clean up their act.