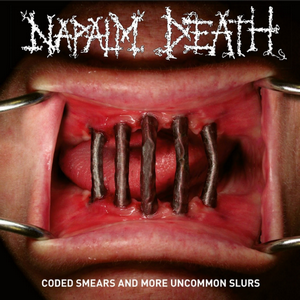 A band as prolific as Napalm Death is bound to end up with some leftovers along the way. Coded Smears and More Uncommon Slurs is not a new album per say, but includes all of the rarities, bonus tracks, and covers that they have accumulated over the period of 2004-2016. To have over 31 songs that span an hour and a half speaks to their productiveness as a band.

But in a case like this, the music still has to be good. It doesn’t take long to impress the listener that even these leftover pieces from a myriad of recordings are still quite solid material. Plenty of the bonus tracks are just Napalm Death doing what they do best. Abrasive grindcore that makes you want to crank the speakers and simply relish in. These type of tracks, such as “Losers,” “What is Past is Prologue,” and “We Hunt in Packs,” would easily fit onto any of their respective discs, with the reasoning behind the exclusion most probably pointing to a bloated album length (never a good thing for this type of music). But there are some treats to explore as well, with the lumbering and doomy “Oxygen of Duplicity” being a quick headturner and a nice break from the explosive grind, as is the eerie “Atheist Runt” or the atmospheric “Omnipresent Knife in Your Back.” Some of the covers are quite intriguing as well, such as the space-y “To Go Off and Things” and the slightly rock-ish/groovy “Paracide.” It’s nice to see the band incorporate their sound into some different avenues with these tracks.

The godfathers of grind have lost none of their venom or bite, as these extra tracks hit just as hard as anything else they’ve released from the same time period. You are getting plenty of material for your price with Coded Smears, and it’s an easy recommendation for any fan of the band if only to get all of these tracks in one easy to find place.