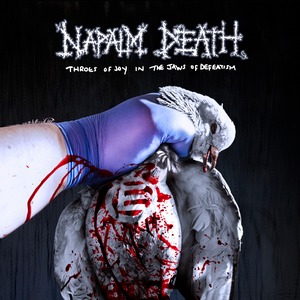 True slaves to the grind, Napalm Death is a name that should automatically garner some respect for their pioneering and chaotic sound, with numerous classic records in their back catalog. The band’s sixteenth (!) full-length, Throes of Joy in the Jaws of Defeatism, is five years removed from the excellent Apex Predator – Easy Meat but finds the band on some equally impressive footing. Whether it’s frenetic death/grind or eerie atmosphere, there’s no substitute for Napalm’s compelling sound.

Coming out of the gate with all of their rage on full display (particularly vocalist Barney Greenway), “Fuck the Factoid” and “Backlash Just Because” show that the band could easily just entertain an entire album of unbridled chaos. These tracks are blistering and unrelenting in their fury and sure to whip up fans into a frenzy with their urgency and speed (as does the title track later on). As the song length expands though, the band incorporates more tools into their arsenal. “Contagion” contains all of the violence of the opening numbers, but isn’t afraid to lay into some mid-tempo groove and eerie atmosphere and clean-ish/chanted vocals when the time calls for it. Something that makes it a standout track due to the mixture of feverish speed bursts and controlled levels of chaos. Some tracks have a more industrial flavor to them, such as “Joie De Ne Pas Vivre,” which acts as a nice blend into the massively groovy “Invigorating Clutch,” which revels in some fiendish sounding darkness as well. “Amoral” also falls into this category, with groove-based and industrial-esque feelings colliding with a punk-ish flair that feels impressively hooky but still grounded in the Napalm Death sound (particularly the more ‘90s groovy stuff). Closing number dives even further into the creepy, industrial vibes the band has been playing with more and ends things on an eerie note that is more of a grower but also one of the more interesting tracks after many listens.

Still the reigning kings of grindcore, Napalm Death can wipe the floor with others when they want to go for an all-out assault. But there’s also something to be said for their continued evolution and being unafraid to continue experimenting and playing with their sound to invigorate it. Throes of Joy in the Jaws of Defeatism is another excellent record from a veteran act that continues to show that their hunger and enthusiasm keep them not only relevant, but at the top of the pack when it comes to extremity.