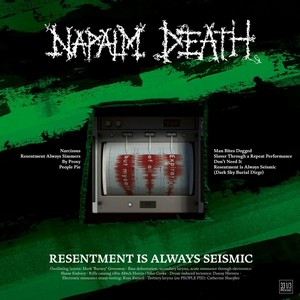 Experiencing a real creative high with their last few releases, Napalm Death has really come out and showcased why they are still the kings of grindcore with releases like Apex Predator – Easy Meat, and 2020’s Throes of Joy in the Jaws of Defeatism.  Resentment is Always Seismic: A Final Throw of Throes is a companion piece to the latter, a mini-album formed from unreleased cuts and 2 cover songs.  While these sort of post-album mini-releases can be hit or miss, Resentment quickly proves itself to be a worthy addition to the lengthy Napalm Death discography.

Just like with their last album, Resentment can do some very heavy lifting when it wants to, but it is still open to some experimentation.  Many songs are absolute ragers, such as the opening “Narcissus” and “Man Bites Dogged,” even if the latter dips into some slight melodic twists, but some of the album’s biggest highlights are in fact the least ‘grind-y.’  The title track rumbles and roars at slower tempos and relishes some groove along with some more esoteric bits that bubble through at times.  The SLAB! cover of “People Pie” has an almost funky feeling to it, with some cool and dark undertones to the track.  Being a cover, it’s got a distinct flair to it, and while some may be turned off a bit for it being Napalm Death, it’s still got that seedy feeling that the rest of the release bites into.  There’s also a remixed version of the title track to close things out, which turns it into more of an electronic song, but it never loses its original darkness – offering a different spin to close things out.

At 29-minutes, there’s actually quite a bit of material to digest for a ‘mini-album.’  Resentment is Always Seismic is another fine release for Napalm Death, providing some excellent moments of rage, but also brooding with darkness around certain corners.  Hopefully the band will keep up the momentum and have a full-on release sooner rather than later, though this is great in the meantime.