Exodus – Class Is Still In Session 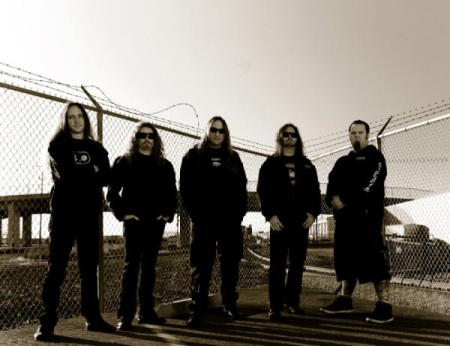 They just keep getting heavier, don’t they? And by “they” we mean Exodus, who have managed to defy the odds (read: the dreadful 90’s, the passing of Paul Baloff, and the exit of Steve “Zetro” Souza”) and are now perhaps the most reliable of the old-time thrash brigade. Since the addition of singer Rob Dukes in late 2004, the veteran Bay Area thrashers have released a string of jagged, brutal albums that have subsequently propelled the band to heights not seen since their mid-80’s glory days. At an age where most are slowing down or are just rediscovering their roots, Exodus are operating at top speed, with the pedal to the floor and a middle-finger in the air. What a sight.

Their latest is The Atrocity Exhibition: Exhibit B: The Human Condition, the follow-up to…you guessed it, 2007’s The Atrocity Exhibition: Exhibit A. Gary Holt and the boys spare no ounce of speed, complemented by Dukes’ now very formidable vocals (check out the lyrics – PC poseurs beware!) and drummer Tom Hunting’s relentless polka beat. A handful of songs here are some of the most ferocious tracks put to tape, namely “Class Dismissed,” “Beyond the Pale” and the 9-minute plus “The Sun Is My Destroyer.” Sure, the album is a bit long (74 minutes, to be exact), but it’s Exodus, and they’ll wear you down.

Blistering caught up with the always-affable Holt to wax on the new album, their increasing popularity, relationship with Megadeth, and that mysterious time in the late 90’s when the band sputtered out before it even got started. Here goes…

Blistering.com: I don’t think it’s a stretch to say that now, Exodus is bigger than ever. Do you feel the same way?

Gary Holt: Yeah, you could say that. But I’m just anxious to get this record out and see what people think. We’ve been back out for seven years, building this thing back up, so I’m just itching to drop this thing on everybody [laughs].

Blistering.com: What do you think you can attribute that to? Is it the thrash revival or the fact you’re easily the most brutal of all the returning thrash bands?

Holt: A little bit of both. To attribute it entirely to some sudden resurgence of thrash metal would be unjust to the seven years where we put in a lot of hard work to bring thrash back. We were out there busting our ass before everyone decided to reunite. I think there’s a little fortuitous timing on both sides and as we’ve worked harder on this, thrash has experienced a renaissance. I think it’s a good case of the stars aligning.

Blistering.com: When you came back in 2004 with Tempo of the Damned, what was the goal? Even then, could see things progressing to this point?

Holt: Our goal was to come out and make a killer record and do the exact opposite of understandably, of what people expected from us: here’s another band past its prime, coming back out to play subpar thrash metal. We wanted to prove we’re relevant and still had all the rage hate that we always had.

Blistering.com: I saw you on the recent Megadeth tour and the set was loaded with songs from Bonded By Blood, but is the temptation there to start putting in more recent songs?

Holt: Toward the end we started putting in newer songs in the set because we were bored. Not like playing the old songs is boring. At first, we just joined in with the spirit of the tour with Testament playing The Legacy in its entirety and Megadeth with the 20th anniversary of Rust In Peace, but we said “Fuck it.” Let’s put “Iconoclasm” in the set. It goes over great live. The new stuff goes over every bit as well as the old stuff. Toward the end, it was predominantly older songs, but we started to spice it up a bit.

Blistering.com: So would you say that tour was a success?

Holt: Oh yeah, it was awesome! It was sold-out virtually every night and the promoters did a great job of getting bodies in the building every time we played. It was a couple of bands that were old friends.

Blistering.com: Megadeth took you out in 2004 when they first came back. Did you always have a good relationship with Mustaine and company?

Holt: Dave’s been a friend of mine since Day One. We don’t see each other very often, but he’s reached out to us a couple of times and getting the chance to go on tour and spend some time talking to Dave is always a pretty awesome thing.