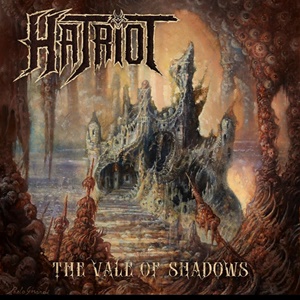 Now establishing a proven formula without the ‘Zetro’ affiliation when Cody Souza took over on vocals for his father for the last Hatriot album From Days unto Darkness, the quartet now feels intent to develop more weapons in the proverbial arsenal for this fourth record The Vale of Shadows. With members in their late twenties to early thirties, it’s understandable that while thrash metal continues to be the main focus of this material, the group’s love for other subgenres from death metal, hardcore, and metalcore pushed through a modern slant allows the penchant for brutality plus heaviness to seep through.

Being a part of the Bay Area movement, of course the heads down riffing, up-tempo drumming, and drop on a dime transitions that promote pit-worthy energy gives “Horns & Halos” plus “Mark of the Tyrant” that blood flowing immediacy appeal, chugging along swiftly with the occasional semi-blast and fierce growling nuanced support. Meanwhile a brutal exercise in death metal domination takes place during “Verminous and Vile” – the ‘Ring around the Rosie’ soft nursery rhyme start eliminated in favor of a steamroller riff parade, honing in on the marriage of American aggression and Scandinavian melodic death mastery. The placement of fluid lead breaks that are bluesy, thoughtful, effective plus guitar-hero worthy from Kosta Varvatakis is another strong selling point to the good for the band – check out his stellar skill set on “The Twenty Fifth Hour”, bending notes at the right time while accenting proper harmony spots. Late in the record Hatriot deliver a quieter, introspective instrumental “Murderous Tranquility”, the calmer, echoing clean start and subsequent lead action reminding this scribe of The New Order-period Testament. Intertwining faster cuts with those mid-tempo stompers ensures dynamic interest front to back – “Clemency Denied” a current favorite through Cody’s venomous deep growls against his sick savage screams plus a killer main rhythm hook that hopefully becomes a set staple.

Add in the sci-fi, personal growth, domestic violence, serial killer style topics delivered with the same mandatory intent as the music, you quickly understand that Hatriot mean business as another example of younger musicians keeping the thrash metal scene alive with their own take on things. The Vale of Shadows should appeal to those who want a bit more modern angst and broader underground finesse in their thrash.