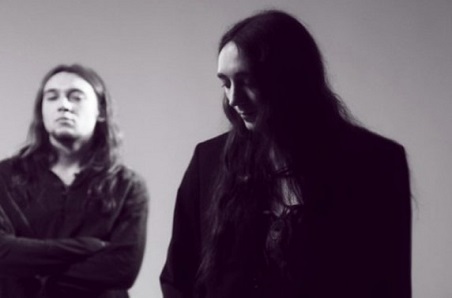 (This content originally appeared on Blistering.com in February of 2012)

Onstage, Alcest’s Neige portrays the artsy artist who relishes in being aloof…forlorn, even. His po-faced countenance will occasionally crack a smile, but this is only when he has to acknowledge the audience. The rest of the time he’s looking down and away, almost afraid to make a connection with those who on some level, are deeply affected by the music he’s responsible for. There’s no in-between song banter or even the announcement of the next song. He’s literally lost in the world he created for Alcest.

Yet when speaking to Neige (real name: Stephane Paut) on the phone, he’s practically the opposite. Talkative and friendly, he is well-aware of his detractors; the faction of people who think Alcest shouldn’t be associated with black metal, all because the band isn’t “true” enough. They’re pretty much correct – Alcest isn’t a black metal band in the slightest sense. The only connection would be Neige’s BM forays in the early 00’s, now a thing of the past. Alcest’s sound is too lush, too pretty, and too petite to hold ranks in the black metal scene anyway…

Now in full promotional mode for Alcest’s new Les Voyages de l’ Ame album (the band’s third full-length), Neige is in a position he probably never thought he’d find himself – highly sought-after. [Neige did admit that according to his booking agent, Alcest could “play every day of the week for the next year” if they had to.] As our conversation would reveal, the Frenchman has an understated confidence to him, practically ready to take on all comers who question the validity or metal-ness of his band. There was quite a bit on the docket to discuss, so with that, onward we go…

Blistering.com: Take me back to your mindset around the Souvenirs d’un autre monde debut in 2007. What would you say if someone told you that five years after its release, Alcest would be this popular, in-demand act?

Neige: [pauses] I don’t know…I just did the things in the manner I wanted. Maybe it’s because of our concepts and our second record [2010’s Ecailles de Lune] got a lot promotion. Maybe that could explain why we’re more popular now or because we’re different. It’s not metal, it’s not rock – it’s a bit of everything. I guess people are looking for us, although we have a lot of haters [laughs]. Some people are looking for emotional music with very deep concepts, which is where we fit in.

Blistering.com: That’s funny you mention the “haters.” A lot of that has to stem from your involvement with black metal.

Neige: Yes, that’s exactly the point. What they didn’t understand that okay, I’m coming from the black metal scene, but with Alcest, I never presented us as black from the beginning.

Blistering.com: What about when you started the band in 2000? I read that wanted to follow in the footsteps of Burzum, Satryricon, and the like.

Blistering.com: Yeah, as in when you started.

Neige: In 2001, maybe, yes. From the moment the first demo was recorded, I was just a kid. I just wanted to play some regular black metal, but after the demo was released, I wanted to do something different. With this music, it goes back to some experiences I had as a child…very strange, having kind of visions. From that moment, and the first EP, it was totally different. I complained a lot about the sound of the first EP because it sounded like black, but when I re-recorded it last year, it sounded much more ethereal.

Blistering.com: You’re on your third album now and have enjoyed quite a bit of critical success. Do those things factor into your mind when composing?

Neige: I think very few people understand Alcest’s music. Very few people are able to understand what we’re about. I’m trying to do the kind of certain black metal, then they’re really, really wrong. I think the most of the people that complain about Alcest are totally missing the point. They should listen to different albums if they’re looking for dark stuff. I never wanted to play dark music, so what the fuck are they thinking about? They say [in whiny voice] “Oh they’re too sweet.” That’s Alcest, man!

Blistering.com: You got a lot of the dark stuff out of your system with Amesoeurs [Neige’s now-defunct dark/experimental metal project – ed.] anyway.

Neige: Yes, but when I listen to Alcest or Amesoeurs, I try to put myself in the universe of the band I’m working with. I don’t try to put something of me inside the music, I just listen to what the artist has to tell. I think it’s not very complicated, but there are many things I don’t understand about metal. But I’ve doing this music for more than ten years, so I’d like to think I know what I’m doing, although I don’t care so much about the expectations. I started this band because I wanted to express some very deep experiences I had, something dealing with another dimension and the afterlife. I created this band because I can’t speak about it or try to make people understand. It’s the only thing I want to do. Even on the next album, it will be very uplifting and harmonious.

Blistering.com: Let’s talk about some of the touring you’ve done of late, including the United States. What were some of your main takeaways? I saw you play on your first American tour in 2010 and after each song, there was a quick round of applause, then dead silence

Neige: People can be silent as long as they applause [laughs]. I prefer there to be silence during the music, but if nobody cares and nobody is happy, then of course, I’m not going to feel satisfied. Of course, I play this music for myself, but I play the audience. For me, I don’t take any pleasure being onstage. The only pleasure I take is when people seem to be happy…I want them to have a good moment. Most of the time, people are very nice and react in a good way. They’re very thankful when they speak to us after the concert. And they say so many very touching things. Many of them…I can’t count the number of people that tell me Alcest has changed their life or saved their life. When you hear this, you are very touched. That’s the most beautiful thing.