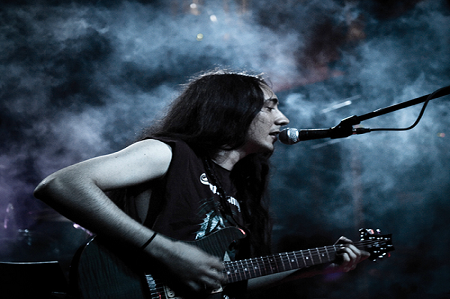 Blistering.com: Have you grown accustomed to the touring lifestyle?

Neige: It’s a very strange life, to be on the road. You feel very lonely, actually. You meet new people all the time and you go places, but you don’t have any marks, you’re always changing while it’s moving. When I’m onstage, I’m in my little world, focused on my guitar and my singing and not be out of tune and have shit singing [laughs].. I do this because I like it, but I am happy when I come home [laughs].

Blistering.com: As for the new album, did you take any time off after the writing of Ecailles de Lune, or did you head right into the new one?

Neige: I am writing music all the time. Since I started, I haven’t stopped on any day. That’s what I like to do – write. I don’t consider it as work; it’s really what I like. When I’m on tour, you can’t compose anything. When I’m on tour, that’s what I’m missing the most – composing. As soon as I get back from tour, I composed some material, so no break.

Blistering.com: Upon my first few listens with Les Voyages, I found it to be a cross between the first two albums. Would you agree with that assumption?

Neige: After the second album, I felt like it was the end of an era for me. I felt like I needed to do a summary album that takes what I’ve done before and pushes it to the maximum. I wanted to deal with the usual Alcest themes, but on a much deeper level. The album has a totally ethereal feeling and out of this world. Even if it takes from the first two albums, it has a strong identity because the atmosphere is different.

Blistering.com: You did an actual single with a video as well with “Autre Temps.” What made you want to do something like this?

Neige: The first idea was to make a music video. It was not to make a single, but then we started thinking about making a single to promote the album. The visual aspect of Alcest is very important – the cover, the imagery, and my dream is to make soundtracks for movies. That’s my dream. I would really like to make music for a movie. We treated the video almost as a short movie. It wasn’t like we made a video with band members playing with guitars…I think with Alcest that would be really shitty [laughs]. I can’t see me singing [makes singing sound]…it would be shit [laughs]. I wanted to do something very close to a movie and it was perfect for the music. To make the visual representation of this song was very simple, something that fits with the music and lyrics.

Blistering.com: We’ve already touched upon this, but a lot of your lyrics and ideas stem from your childhood dreams and experiences, including the heavenly gardens. How much did you elaborate upon these ideas with Les Voyages?

Neige: The music and everything is coming from this concept and dimension. Every single melody, every word is the only the thing I want to do with Alcest. If I want to do something else, I’ll make a side project. I only want to take the ideas from that dimension and put them into this world. That may sound strange, but it’s the only thing I want to do. It feels real for me. It’s not imagination or fantasy. It’s a real experience – I’ve read books and have talked to people that have had similar experiences. We know very few things about existence and the world.

Blistering.com: Have you accumulated new ideas for this concept, meaning, you have discovered new things about yourself when writing for Alcest?

Neige: I am growing up, so of course I am changing as a person. That’s why each album is a different side of this concept. What I will do on the next one, maybe I will do things in different way. It always changes with me, but at the core, it’s the same. I always take direction from the same source. I have this inside me; it’s always here. I just have to go inside myself and make it. Of course, it’s not easy. The more I grow up, the less it is for me. It’s something I had when I was young; now it’s a bit blurry. Sometimes I watch a movie or listen to music or see a landscape that can remind me of the sensations I had when I was a child. It’s easy to recall memories.

Blistering.com: How important is it for you to do side projects? You have Old Silver Key and Lantlos, so is it a matter of keeping the creative juices flowing or helping out some friends?

Neige: It’s very important because I have no pressure, no stress. With these projects, I just put my voice to the music that’s already recorded. It’s just good music. I take a lot of pleasure in it. Contrary to Alcest, I can take pleasure with it. With Alcest, it’s very painful because I’m so critical of myself. I want always the things to be done my way. I have a lot of pressure, but it’s not pressure from the outside, but pressure I put on myself. When I have a side project, it’s like fresh. It allows me for one moment to do things…it a more different way.

Blistering.com: Well, you get your black metal kicks with Lantlos.

Neige: I think the new album [Agape] is very good. It has very contrasting reviews, some are very good and some are very bad, but I think it’s a great album. It doesn’t sound like anything else. It’s very special…I can’t even describe. If someone asked me to describe the recent Lantlos album, I wouldn’t know what to say. I would say it’s an introspective journey, very gray, very intimate. It’s a very lonely album. I remember in the studio, I screamed like hell [laughs].