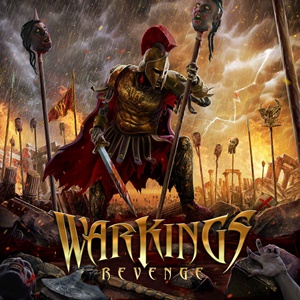 The four ancient kings return with Revenge – the second album from Warkings. Using aliases such as Tribune, Crusader, Viking, and Spartan, this international four-piece keeps power metal alive and shimmering. Steeped in battle-tested tradition, the ten anthems contain the requisite uplifting melodies and proper double kick/guitar muscle support to hit most consumers in that ideal ‘unity’ mode. Containing the modest amount of triumphant orchestration/keyboard support against the marching riffs, the bombast and ‘cheese’ factor is on high, which could impact the overall enjoyment of this record through successive passes.

The lead break prowess of Crusader along with the trained multi-octave pipes of Tribune (otherwise known as Georg Neuhauser from Serenity) carries some credibility for certain songs – as if you are putting Firewind and Mystic Prophecy through a Powerwolf/Metalium filter during the crunchy “Warriors” or slamming “Battle of Marathon”. A female guest vocal appearance from Queen of the Damned takes place during “Odin’s Sons” – the Viking influence quite strong in the main trilling musical hook, the semi-growls against clean melodies giving off an Amon Amarth texture against the conventional power metal. While the layers of guitars and solid rhythm section mechanics tightly achieve modest appeal, the main boredom factor lies in the fact that Warkings aren’t exactly rewriting the history books in their choices – merely parading a series of clichés and prominent passages already done better by acts previous to their time. Be it the Hammerfall-like ‘ohh’ background chants during “Mirror, Mirror” on through to the folk-like/exotic opening strains that give chase to double-kick Primal Fear nirvana during “Freedom”, there’s an air of predictability which screams ‘been there/done that’ moments in almost every track. How can you not smirk at ‘we will die for glory/we will tell the story’ during the chorus for “Maximus” or the forceful ‘I am – I am the Warking’ belted out during the mid-tempo, Manowar-like “Warking” closer?

Two albums in and they are losing this scribe’s interest quickly. Warkings rely too much on overemphasizing the bombast battle-laden themes, silly stage names, and predictable hooks and choruses done infinitely better a decade (or two) previous.