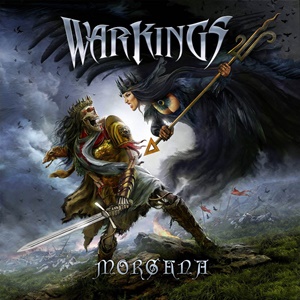 For the fourth album in five years Morgana, Warkings have added a female Sorceress Morgana Le Fay as another voice to the adventurous power metal template. A sister of Arthur and mistress of the lost souls, her vicious, extreme delivery gives those tracks an added evil element to contrast the conventional European-styled riffing, hooks, and uplifting melodic nature that has previously been established over the past few records. Listeners can expect ten originals that encapsulate more of the tried-and-true iron clad, steel platform, plus two covers that pay tribute to future tourmates in Powerwolf / Dragonforce.

All the expected bells and whistles from bombastic keyboards to uplifting choirs, militant marching chord progressions to appropriate narrative / simulated sound effects appear in all the requisite spots beyond the normal duties of instrumentation The Tribune, The Crusader, The Viking, and The Spartan provide. Pan flute strains soon fade as the gang chants, double bass, plus sinister guitar riffing portray “Shame” into an exhilarating power anthem, while opener “Hellfire” unleashes the female growls of Morgana Le Fay in a classic Arch Enemy manner, serving as an opposing force to the soaring, clean mastery within The Tribune’s natural delivery. Beyond the tales of kings’ past – including a four-part Morgana/King Arthur-oriented story that’s spread out over the track listing – we get a special hymn honoring the fans of Warkings with “To the King”, the riffs, hooks, and transitions aligning with those who love Hammerfall, Sabaton, and Powerwolf. The cultural, Middle Eastern atmosphere through specific guitar parts plus quieter voicing for “The Rite” makes this song a back half favorite, while the tributes to Powerwolf and Dragonforce with “Amarta Strigoi” and “Cry Thunder” respectively showcase fun interpretations of acts they respect/ admire, aiming high to put a Warkings spin on the tracks.

Power metal inherently should transport the listener to another dimension far from reality. Warkings achieve that through their songwriting, concepts, imagery, and attitude – making Morgana not necessarily the most original record in this style, but entertaining, nonetheless.