Seeking the soundtrack to your next major battle?  Or perhaps just longing for a catchy sing-a-long you can raise a fist (or a sword) to?  Warkings have you covered with both angles, with their recently released third album Revolution (out now on Napalm Records) rallying the power metal war cry with triumphant choruses and hooky riffs to sink your teeth into.  We spoke with The Viking, bassist of the band, to get some further insight into the band’s collective activities surrounding the new album, thoughts on power metal, and the return of live shows.

Dead Rhetoric: What do you feel, three releases in, best describes the sound of Warkings?

The Viking: I would say big sing-a-long choruses, heavy guitars, and lyrics about ancient battles….if you can add that to the sound [laughs].  It’s metal with big, heavy guitars and catchy choruses.

Dead Rhetoric: How do you feel that Revolution brings Warkings to the next level?

The Viking: We always try to improve our sound.  We have this vision of the music genre we are trying to be – as heavy as possible.  I know on the one side we are also very melodic.  With this release, we are one step closer to what we want to sound like.  We tried to make the guitars more raw and in your face but without losing the melodies.  Right now, this is the closest to what we want to sound like in our heads.

Dead Rhetoric: Do you feel that is the big challenge: as you make it heavier, to keep the melodic essence still intact?

The Viking: Yeah, we are still playing power metal so you can’t compare us to bands like Cannibal Corpse in terms of being heavy [laughs], but yeah it can be a challenge.  You don’t want to lose that melody, or the big chorus or sing-a-long.  The things that the fans like.  But you want to make it raw and heavy.  It’s a bit like walking on the edge of a sword.  But this time, we had a lot of time in the studio, so that we are very close to our vision of the sound.

Dead Rhetoric: I like the analogy of ‘walking on the edge of a sword,’ it’s very fitting for the band itself.

The Viking: It’s easy to be heavy, or just to tune up the guitars volume-wise.  But you want to keep that balance, and that’s the trick.

Dead Rhetoric: Any intriguing tales come about in the writing/recording of Revolution?

The Viking: I think this is like most musicians/bands were like, but we had released our second album and we were pumped up and ready to go.  We had a lot of tours coming up and festivals, so we were pumped up and full of energy, but then it was like, ‘no, it’s impossible,’ so we went into a studio not with the idea of writing a new record, but the idea of instead of starting to fight each other, to use that energy to write some songs and see what happens.  One thing lead to another and then there was 10 songs, so it was like, ‘okay, make another record.’  That’s the story really – we had a lot of energy that we wanted to use for concerts and went right into the studio and used it there.

Dead Rhetoric: What do you hope people get out of Revolution when they hear it?

The Viking: Hopefully, first off I hope that they like the songs and the sound direction that we went in.  it’s a good time heavy metal record with big choruses, and I hope people remember that.  You have to sing along with us when we are allowed to do concerts again.

Dead Rhetoric: How did you come across the Lost Lord [Chris Harms of Lord of the Lost]?

The Viking: We were just hanging around in Valhalla, and he was hanging around in the studio where we recorded the record.  We had this talk about what we could do with the song “Spartacus,’ the legendary ancient leader in Rome.  So we asked if he wanted to jump in and join us and add some of his fantastic vocals.  It came out great.  It fits the song perfectly, giving it this harsh edge on the one side and then the big melodic chorus on the other side.  It’s just what we wanted.

Dead Rhetoric: You mentioned the live shows before, when can fans expect a live battle?

The Viking: We just had three concerts in the last two weeks, so in Europe it is different in every country.  We had two shows in Austria and one in Germany.  The ones in Austria were nearly without limitations so it was kind of fantastic.  The changes happen every two weeks.  In some countries they are starting to do new restrictions again.  We are hoping that there are more to come in the next few months.  We have a tour coming up in January in Europe that was supposed to take place this past January but was postponed to 2022.  Hopefully that happens.  Right now we are just happy from having two great shows and it was fantastic to be on stage and have the people singing with us.  Hopefully it goes the right way.  I think its coming back now, maybe slowly, but its coming back to normal with the vaccinations and things.

Dead Rhetoric: Things are just starting to come back, did you notice a larger amount of energy from the crowd from that hunger for live music?

The Viking: Definitely!  It was on both sides.  We were hungry to go on stage.  We played a show last Friday in Austria called Metal on the Hill.  It’s an ancient old castle and was like of like an open air show from the ancient times in the Roman Colloseum.  It was fantastic.  The energy was unbelievable.  You could feel the people were hungry.  We went on stage and the place just went on fire!  It was really great.  They were the first three shows in 21 months and it was fantastic.

Dead Rhetoric: What do you feel Warkings provides a fitting soundtrack for?

Dead Rhetoric: That triumphant battle against the lawn [laughs]!

The Viking: [Laughs] Sometimes that is a battle.

Dead Rhetoric: What drew you towards power metal as a sound?  What do you like about it?

The Viking: You can tell the stories that you want to do with the music.  You can fit it in every direction.  I think it works really well if you add flavors from other genres into the music.  Like I mentioned before, you have the heavy guitars and all that, but you also have beautiful sing a-long melodies that we all really love about the genre of music.  You can call it power metal, but we just call it metal.  We really like combining heavy and melodic at the same time.  If you like Cannibal Corpse and all that, and you think new are pussies that’s right [laughs], but I think it’s a great combination.

Dead Rhetoric: Reborn, Revenge, Revolution – what comes next for Warkings?

The Viking: Hopefully a lot of concerts, for maybe the next ten years [laughs]!  We are fed up with being in the studio.  The last concert before those three shows was in November 2019.  We went straight into the studio to record Revenge and we shot the videos and all that, then we went right back to record Revolution and started everything over again.  So hopefully there will be a lot of concerts to gather new experiences and share the songs with the fans.  Then we will see.  Maybe in two years we will do another album.  Right now we are really eager to go out and play!

Dead Rhetoric: You bring up a good point.  You have two albums to tour on and you want to make sure they get their due before you move on!

The Viking: Yeah!  We had a lot of discussions/fights in the band about what songs to play at the last shows because right now we have three albums to promote so there were some long discussions on what to play, since we have a limited amount of time – especially on festivals.  It wasn’t like, oh let’s play a few from this album and that one, we needed to try to squeeze more in! 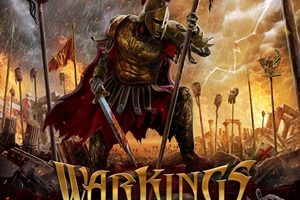