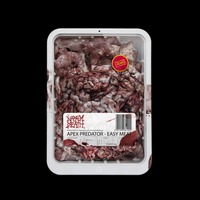 Apex Predator – Easy Meat shows no signs of Napalm Death slowing down. Blistering and grinding numbers like “How the Years Condemn,” “One Eyed,” and “Smash A Single Digit” show the band’s continued mastery of the genre with feverish intensity. It’s hard to sit still and contain the energy of tracks like “Cesspits” and “Stubborn Stains” as they flow through your body. Sure, they’ve built their template upon ‘noise for music’s sake,’ but it’s the band’s tendency to experiment that sets them apart and distinguishes them from their peers. This time around, there’s the tribal-esque title track that opens the album, the thick groove of “Timeless Flogging,” the throttling build to the creepy climax of “Adversarial,” and the sung vocal chorus of “Hierarchies.” The pick of this bunch would have to be the slower and more eerie approach to “Dear Slum Landlord,” which features some spoken/chants verses alongside Barney Greenway’s visceral roar to impressive effect. Those with a narrow view of grind should be easily swayed by the variety that is displayed here.