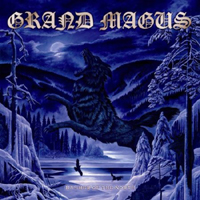 In 2010, record labels are constantly reinventing themselves to keep up with consumer’s tastes. With the power more than ever at the pulse of your keyboard fingertips, the average fan isn’t blindly accepting what is pushed forward just because it’s commercially viable. So not surprisingly, Sweden’s Grand Magus graduate to major impact status following their move up the ranks to Roadrunner with their fifth album Hammer of the North after four well-received efforts on Rise Above Records.

Most knowledgeable metal followers know vocalist/guitarist Janne ‘JB’ Christoffersson from his work in stoner act Spiritual Beggars, but JB has chosen to fully concentrate now with this traditional-meets-doom trio. The timing is ripe for Grand Magus to steamroll the competition, as the riffing represents lean and mean classic influences, simply pummeling drum grooves and bass play that recalls all the mighty NWOBHM and Black Sabbath incarnations.

“Northern Star” for instance, begins with a two-step drum gallop from SEB while JB delivers his vocals as if atop the highest mountain – the guitar riffing and tone searing through your speakers with the excitement of a burgeoning British 80’s act. “The Lord of Lies” meanwhile sends chills with Fox’s understated bass parts and the doom gloom pacing perfect for one of those psychological horror films.

The band like to mix up their arrangements between slow and upper mid-tempo- two of the better tracks in the latter category with opener “I, the Jury” and the rhythmically engaging “At Midnight They’ll Get Wise.” They excel though at the numbers where simplistic methods are developed into addictive hook laden riffs and JB’s melodies carry the weight of despair, as in “Bond Of Blood” or “Ravens Guide Our Way.”

Grand Magus may have the chance to bring the old back to a new audience ripe for something special, as Hammer of the North could fill a void with people missing Dio-led Sabbath and also champion a future for trad doom metal.