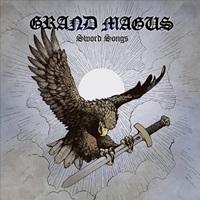 Two disparate schools of output exist in heavy metal these days. Artists who believe in developing a unique album each time, hopeful that their following will come along for the creative ride. Others, once establishing their style, feel content to churn out similar sounding output, not rocking the boat to satiate current fans while hopefully proving their worth based on consistency. Combining the best in traditional doom and mighty heavy metal, Grand Magus since 1996 (as Smack for the late 90’s before changing names) has been one of Stockholm’s saviors to wield a power trio force of anthems that double as an iron clad call to arms – thus belonging to the latter philosophical camp.

Sword Songs as the band’s eighth studio album may have taken a new tact in terms of using two studios for recording purposes (drummer Ludwig Witt recording at Top Floor Studios, while bassist Fox Skinner and guitarist/ vocalist JB Christoffersson tracking at Studio Supa), but keep the classic, churning 70’s-ish riff parade, solid/pounding tempos and mountain-top melodies top of mind from front to back and side to side. Choosing to get things off to a rollicking fist pumping start through the mighty “Freja’s Choice”, the Thin Lizzy-esque meets electric folk-ish “Varangian” contains ready for battle spirit, the ‘we are warriors’ chorus rabble rousing for chanting at parties or large festival gatherings. JB and the boys profess as much love for Rainbow/Sabbath as they can, but don’t rely on replicating what we’ve already heard. Choosing to make things their own in terms of tasteful, melodic lead breaks for “Forged in Iron – Crowned in Steel” or incorporating tasteful clean parts against Ludwig’s large, open snare work on closer “Every Day There’s a Battle to Fight” – it’s probably the closest to a true ballad you may ever hear in the Grand Magus catalog.

The little things mean so much on a record like this – background vocals that evoke “Creeping Death”/‘die’ like fervor, a short “Hugr” instrumental that gives somber reflection before the final cut, galloping sections when called for while staying steadfast in their heavy metal calling- plus an economical playback time under 35 minutes ideal for vinyl fiends to avoid wavering attention spans. Even the promo pictures with band members brandishing swords, leather, and bullet belts scream for tradition – and this scribe also applauds the rather sparse eagle-oriented cover, simple and oh so effective.

A winning discography for decades, Sword Songs rivals Iron Will and Hammer of the North for the best in Grand Magus’ catalog.