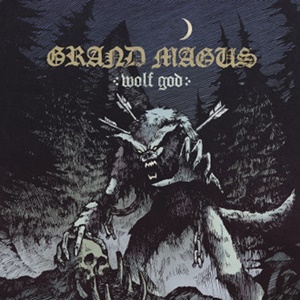 Setting a precedent through sterling metal works like Iron Will and The Hunt, Grand Magus march to their own beat, resolute in their stance and style. Intertwining aspects of traditional heavy metal with epic and doom strains, the trio decide to change things up a bit in terms of the recording for their ninth studio platter Wolf God by delivering performances live on the floor, first takes capturing the spirit of the music best. Veteran acts often rise to the occasion of a new challenge – and these performances certainly embrace their true as steel philosophy which should translate easily to their ever-faithful following.

The tones this three-piece achieve are a masterclass itself in dialing in massive girth for guitars, bass, and drums. How can you not be slayed by the titanic title track and speedier “Spear Thrower” – both featuring instantaneous headbanging hooks on the music front for JB’s mountain-top vocal melodies to add that extra aural excitement. Bassist Fox Skinner and drummer Ludwig Witt stay the rhythm course, invoking the memories of early Motörhead for the opening sequence of “A Hall Clad in Gold”, the double kick and pumping bass providing the impetus to raise arms in glory. JB’s ability on the guitar to make it instrumentally sing through carefully constructed lead breaks speaks to his influences from Tony Iommi to Judas Priest and Manowar – check out “Brother of the Storm” and “To Live and Die in Solitude” for two clear examples of his thoughtful, measured phrasing. And Grand Magus also understand that you can’t frontload a record with the best cuts – albums need that dynamic diversity, as a catchy anthem like “He Sent Them All to Hel” appears as track nine, a probable future set hellraiser with a chorus demanding crowd chants.

Many believe the early albums of Grand Magus were more in the Ozzy-era Sabbath tradition – but since 2005’s Wolf’s Return, you can hear more of the traditional and epic influences also sitting toe to toe with their love of doom metal. Wolf God keeps the band’s steadfast style front and center – not wavering from what they do best and should appease most already into the coven while hopefully gaining quite a few newcomers.