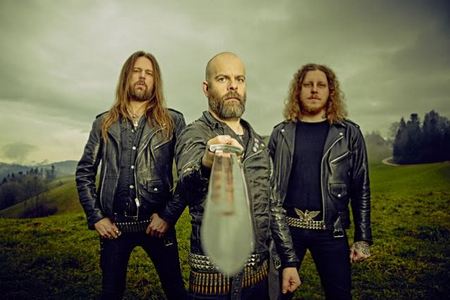 To ardent Dead Rhetoric readers, most of the staff as a collective has a strong appreciation for Grand Magus. Establishing a regular discography that crushes in traditional metal scope with riffs that can hook you instantly, beyond the melodies and choruses that also command audience involvement – it should be no surprise that the latest platter Sword Songs is another winner. Already conquering their native European stages to the point of being a consistent tour headliner and upper bill festival presence, one hopes that they will make an eventual sojourn to North America in turning more metal heads onto the trio’s wares through the power of iron will.

Firing off a round of questions by e-mail to guitarist/ vocalist JB, you will learn more about the man’s love of nature, why they choose to employ multiple studios for an ideal recording output, plus the band’s belief that simplicity in gear can pay bigger dividends in the long run for their sound. And if you need to play catch up in terms of their discography, this scribe suggests taking in a healthy dose of Iron Will, Hammer of the North, and the new record to get the best Grand Magus fix.

Dead Rhetoric: Sword Songs is the new album – how do you balance the band’s desire to come up with fresh material in a creative manner while also keeping in mind the expectations that the long-term fans of Grand Magus have?

JB: Hmmm…. well I think that first and foremost you have to follow your instincts and what’s in your heart when you do music. This is what we’ve always done and all our albums are a bit different because of that. At the same time, I kind of feel that our listeners know that we won’t stray into bullshit territory whatever we do. It will be heavy metal, it will be honest and it will be songs you can remember. I would be very surprised if we suddenly made music that didn’t hit the spot for most of our listeners. You can’t please everybody though. The more people that become aware of you, the more people will also be critical of what you do. That’s just the way it is.

Dead Rhetoric: What circumstances take place to record the album in two different studios like Studio Supa and Top Floor? Not that I’m complaining, as I believe the drum sound is quite natural and crisp in comparison to a lot of modern productions these days…

JB: We’ve actually done this for quite a few albums now, ever since Hammer of the North. It’s mostly because of practical reasons, the drums need a proper room with ambience and high-end facilities. For the rest it’s more important for us to have a lot of time to be flexible and try a lot of different approaches, so then it makes more sense to be somewhere cheap when it comes to the facilities, if you know what I mean? We spend the money on time in that part of the recording. Studio Supa is as bare-bones as you can get and it’s usually just me and Nico the producer there at the same time, or Fox and Nico. For vocals, all you need is a top-end microphone and for guitars a great amp and good micro-phoning techniques. We don’t need a fancy room for that. Having said all this, we will try new approaches in the future. Maybe (even) record totally live like we did on the first album.

Dead Rhetoric: Tell us the thought process behind the cover of the record – it’s striking yet quite natural, embodying a lot of the strength and spirit of Grand Magus’ output?

JB: Yeah, thanks. That’s a big part of what we are after. There are some specific circumstances surrounding the central image of the eagle though. It’s not just any eagle, it is the white tailed sea eagle, which is the largest bird of prey in northern Europe. Since I was a child I have been fascinated by nature and animals. This species was almost extinct in Sweden when I grew up, due to pollution, but has made a great comeback in the last 10 years or so. Where I live now, by the sea outside of Stockholm, I can actually see them from time to time and that has a huge emotional impact on me. That’s why it’s on the cover. Also, because of the title, it has a Viking sword in its claws. A sea eagle clutching a Viking sword, pretty mighty stuff in my opinion (laughs).

Dead Rhetoric: Now that you’ve been with Nuclear Blast for a few albums, where do you see the major differences in their level of promotion and commitment to Grand Magus in comparison to your time on Rise Above or Roadrunner?

JB: I can’t really compare them like that. Everything has been different when we have worked with different labels. Also, I think the business side of being in a band is something that bands talk too much about…. I just think it’s very un-metal if you know what I mean, (laughs). Generally, I think a lot of bands talk more like they’re businessmen or project managers than headbangers. Not my cup of tea.

Dead Rhetoric: In a previous interview you talked about your love of the forest as well as fishing. Have there ever been times where out of the solitude great ideas either lyrically or musically developed through the years for Grand Magus? And what are some of your favorite places to take refuge in the forest or fishing?

JB: Yeah, absolutely, no question. Both musical ideas and lyrics pop up when I’m doing that. If you enjoy being in the forest or nature in general, all social pressure and stress slides off you and you kind of slip into a state of relaxed consciousness that is both alert and almost hypnotic at the same time. In that state, I sometimes get kernels to ideas that usually are the best ones. I have many favorite places close to where I live, for instance I have a walk that takes me through both open country and forests and I’m almost always greeted by ravens that recognize me, which is a fantastic feeling. They call out to me and I say hi to them. This started almost six years ago and I tend to take this walk at least once a week.

Dead Rhetoric: Now that you are well established on European soil as a headlining act, what circumstances need to be set in motion for some touring in North America – even if it’s on a limited basis?

JB: Hard to say. Probably a good support slot would help. We’ll see. I do think we’ll come to the US soon.

Dead Rhetoric: You’ve also compared an album to a novel in the sense that the great ones you want to take in over and over again. What would be three of your all-time favorite hard rock or heavy metal albums that you never get tired of listening to and fuel the creative fire within Grand Magus – as well as the best concert performance you ever took in from an audience perspective?

Dead Rhetoric: What have been some of the strangest and/or scariest moments that you’ve dealt with in Grand Magus – be it particular fans or travel/weather related occurrences that you can remember distinctly?

JB: I do remember when we had just released The Hunt in 2012 and started on a festival tour, doing a concept called Metalfest that had festivals all over Europe. The first one was in Austria I think and there was this truly awe-inspiring thunderstorm. It ripped the main stage to shreds and it was hailing golf ball-sized hail and people were genuinely terrified. I loved it, the power of nature strikes!

Dead Rhetoric: What are your thoughts on the art of guitar playing in the metal scene for 2016 – as I would imagine that you see a lot of pluses and minuses that could be beneficial for younger musicians to take into account and consider?

JB: Since I’m the singer of the band, I have a strong need to keep things as simple as possible when it comes to the live setup. In my experience that also benefits a rich, strong guitar sound. It’s quite common that we play with bands that have these incredibly elaborate guitar rigs – and definitely play really well – but what comes out is really tiny and weak. Then when we, three guys come out, people say that the guitar sounds so big. It’s not because I’m the most technical player or because I have the most expensive gear – it’s because I have a super simple setup (among other parameters of course). I’d recommend that to anyone. Don’t get caught in gear…. in this case, less is actually more.

Dead Rhetoric: How is the rest of 2016 shaping up for Grand Magus in terms of touring and promotional opportunities, and will you ever consider the possibility of a documentary or live concert DVD/Blu-Ray soon?

JB: We’ll start off in May with summer festivals, we’re doing about seven or eight, including Download in England, Graspop in Belgium and Summer Breeze in Germany. Then we have a huge European tour coming up in the fall…. When it comes to live recordings and DVD stuff, I’m a bit ambivalent to be honest. I think they have lost a lot of their appeal over the last 20 years, (laughs). I don’t think people are particularly interested in live recordings anymore. Our focus has always been to give our listeners high quality recordings of new songs, rather than put out live footage. I think the live experience is almost like a sacred thing between the band and the people present. We’ll see though. We have some stuff recorded that could be cool.