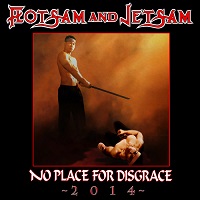 Per the usual, Flotsam & Jetsam are a step behind their contemporaries in Anthrax, Exodus, and Testament, each of whom already saw fit to re-record some of their seminal works. The results for all three were a wash; who really wants to hear an updated version of albums and/or songs that are classics? On some level, the same question exists for Flotsam & Jetsam, although calling their sophomore No Place for Disgrace a “classic” might be a reach.

Re-recorded with the intention of enhancing the previous version since the original master tapes were difficult to locate, the second go-round of No Place for Disgrace is characterized largely by the absence of Erik A.K.’s scrotum-grabbing highs, a hallmark of the band’s early sound. Age, along with wear-and-tear will do that to a singer, so having A.K. hit these tunes in a register lower might take off the sheen for some; for others, the prospect of mid-range thrash vocals in such a context could be appealing, particularly on some of the album’s more adventurous cuts, “Dreams of Death,” “Hard on You,” and “Misguided Fortune,” which to this day, is probably the band’s best song.

So obviously the sonics are vastly improved – polished, but not in an overt fashion. Does that a better version than on the original make? Not necessarily, but perhaps these things are done so the band can sleep better at night. And it’s not like Flotsam & Jetsam are sleeping on beds with large piles of money and beautiful women…they’re forever the embodiment of everyman thrash, forever a notch below whoever constitutes the group under The Big 4. Thrash categorization in the house.