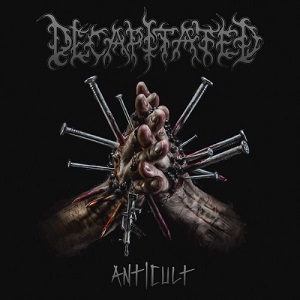 Decapitated’s 2006 Organic Hallucinosis was the clear game-changer for the Poles. Boasting one of the heaviest production jobs in recent death metal history, the album saw the band make the shift from tech death mongers to unabashed masters of heaviness and innate brutality. Whereas other brutal death metal bands continually get lost in the weeds by overextending their reach, Decapitated, or more specifically, guitarist/main songwriter Wacław “Vogg” Kiełtyka, came to understand that brutal death metal success is achieved not by overwhelming the listener, but by peppering it with shards of extremity, groove and brute force.

Since Organic Hallucinosis, Decapitated has refined their sound to the point where it’s arguable whether they’re even a “true” death metal band. Anticult, like its 2014 Blood Mantra predecessor, hunkers down on chunky, if not simplistic, but ultra-heavy riffs, further defining the band’s sound while moving away from their early DM forays. It’s a transformation that spins blindingly savage jams like “Kill the Cult” and “Earth Scar” into some of the band’s most upward songs to date. And of particular note should be Vogg’s guitar tone, which seemingly gathers steam with each down-stroke and palm-mute. A man capable of spinning ungodly webs of technicality, Vogg’s restrain and focus on catchiness should be commended.

Vocalist Rafał Piotrowski helps in Decapitated’s continued move away from brutal death metal norms. Sounding more comfortable than on Blood Mantra (still a tad hung up over the weird song title “The Blasphemous Psalm to the Dummy God Creation”) Piotrowski’s near-hardcore shout may not possess the girth of traditional death metal singers, but he’s got plenty of bite on “Impulse” and “Amen.”

While the band’s career is forever altered by their horrific 2007 bus accident that claimed the life of drummer Witold “Vitek” Kieltyka and permanently sidelined vocalist Adrian “Covan” Kowanek, Decapitated remain an undisputable force on Anticult. With Vader now fully settled into elder-statesmen status and Behemoth going experimental, Decapitated has emerged as the first name in Polish extreme metal.